Active Fiction Project the third: As Above, So Below

Active Fiction is back! It remains in effect only in Vancouver for the time being, and, perhaps unsurprisingly, returns to the Riley Park neighbourhood for a hat trick slam dunk. I tried to collect, capture and document the first installment when it launched, then did a little promo on the second when it emerged... impatient, I even profiled what little I could glean about the organization without their answering any of my interview questions in SPAG, the Society for the Promotion of Adventure Games newsletter (come to think about it, it's been 188 days and I still haven't had any questions answered...)

(To bring you up to speed, Active Fiction installs text passages in public locations -- typically attached to lamp posts with zap straps -- each advancing a paragraph or so of story and directing readers to the location(s) of further passages nearby in the area that they may choose to visit in order to continue the narrative. The stories tend to run to ~20 passages overall, and their layout does not necessarily follow an optimal path. Because I don't live in the area, I visit in my car and quickly "lawnmower" all of the story passages using my camera, so I can leisurely read my way through the story threads after my little ones are tucked in. This has the side effect of privately preserving the stories for posterity, as they are only posted in public for a limited time! I was initially gung ho about mirroring the stories here for the ages, but the Active Fiction folks have kindly asked me to refrain from such activity, so now I just give you teasers and invite you out into the streets to experience them for yourselves.)

This time around we revisit some familiar territory but with a more magical realist approach. The very day I got wind that the laminated cards were up on the street, I cleared a block of time that afternoon and started plotting out a grid of story nodes, so as to facilitate and expedite my complete collection of the story fragments -- I wanted to be the first to report on it! Sadly, though all of my ducks were in a row, I've been somewhat blogly backlogged, so now everyone will think that I'm just poaching the story from the 24hrs free daily newspaper. Alas! 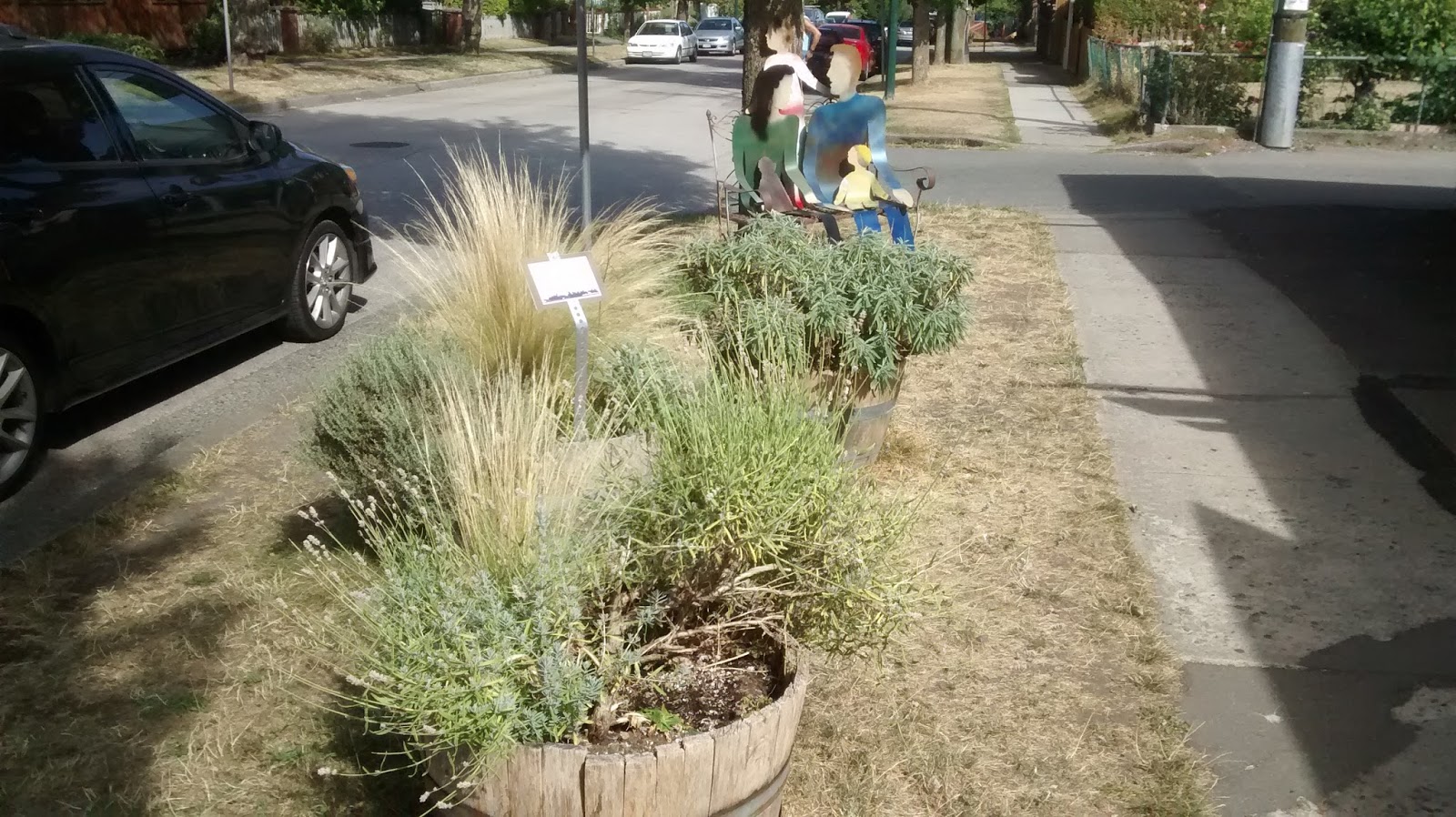 This one began at the same location as the previous story, just east of Main Street at 28th Avenue. It's given the ominously astrological title As Above, So Below, and is written by one Brittany Huddart about whom I was unable to dig up any juicy info online. Let's get a little bit closer... 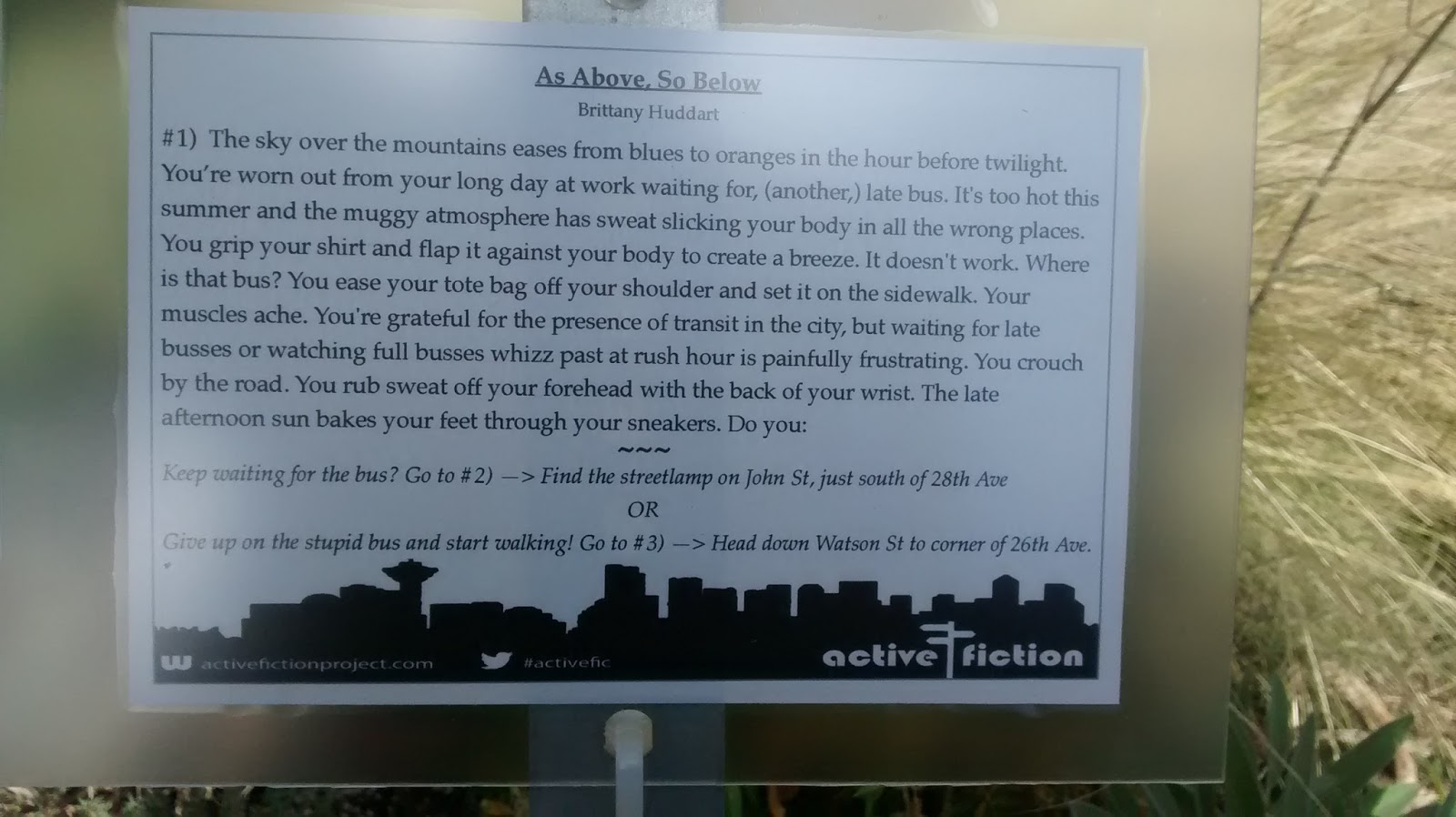 #1) The sky over the mountains eases from blues to oranges in the hour before twilight. You're worn out from your long day at work waiting for, (another,) late bus. It's too hot this summer and the muggy atmosphere has sweat slicking your body in all the wrong places. You grip your shirt and flap it against your body to create a breeze. It doesn't work. Where is that bus? You ease your tote bag off your shoulder and set it on the sidewalk. Your muscles ache. You're grateful for the presence of transit in the city, but waiting for late busses or watching full busses whizz past at rush hour is painfully frustrating. You crouch by the road. You rub sweat off your forehead with the back of your wrist. The late afternoon sun bakes your feet through your sneakers. Do you: 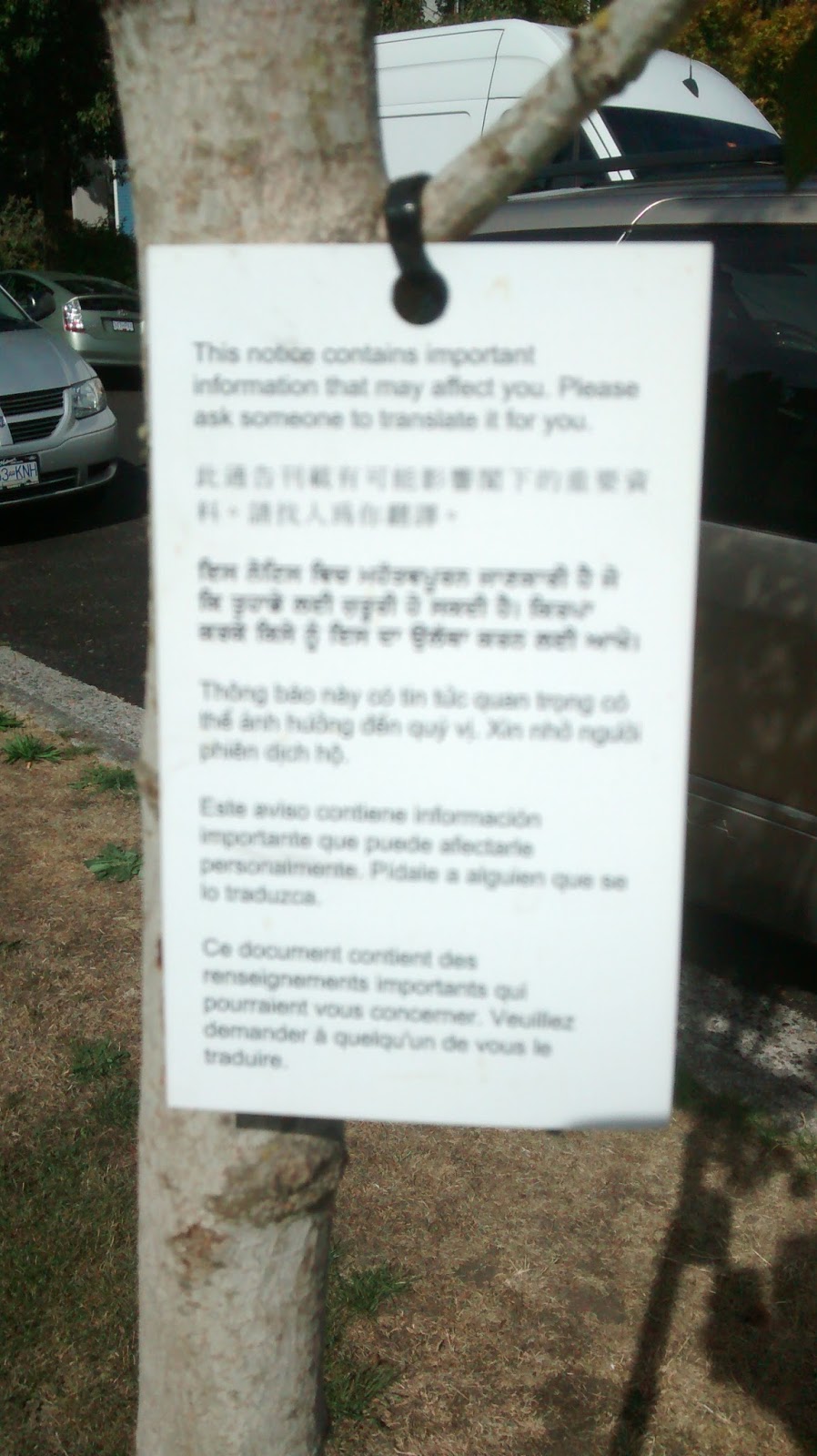 Wait a sec, that's not an Active Fiction story node... it's instructions on keeping a city-planted tree watered! You develop a hypersensitized sixth sense hunting for the story cards flapping on the boulevards, knowing only that a target card will be situated somewhere on a given block without knowing its nearest address or even which side of the street it'll be located on. More than once, with my Spider senses fully engaged, I caught story cards "in the wild", finding them while passing through before my story explorations had directed me to their particular location. (My collecting really cares nothing for sequence; after grabbing my photo, I'll scan my list of known locations and make a bee-line to the nearest one. I can read them later! How decidedly postmodern.) 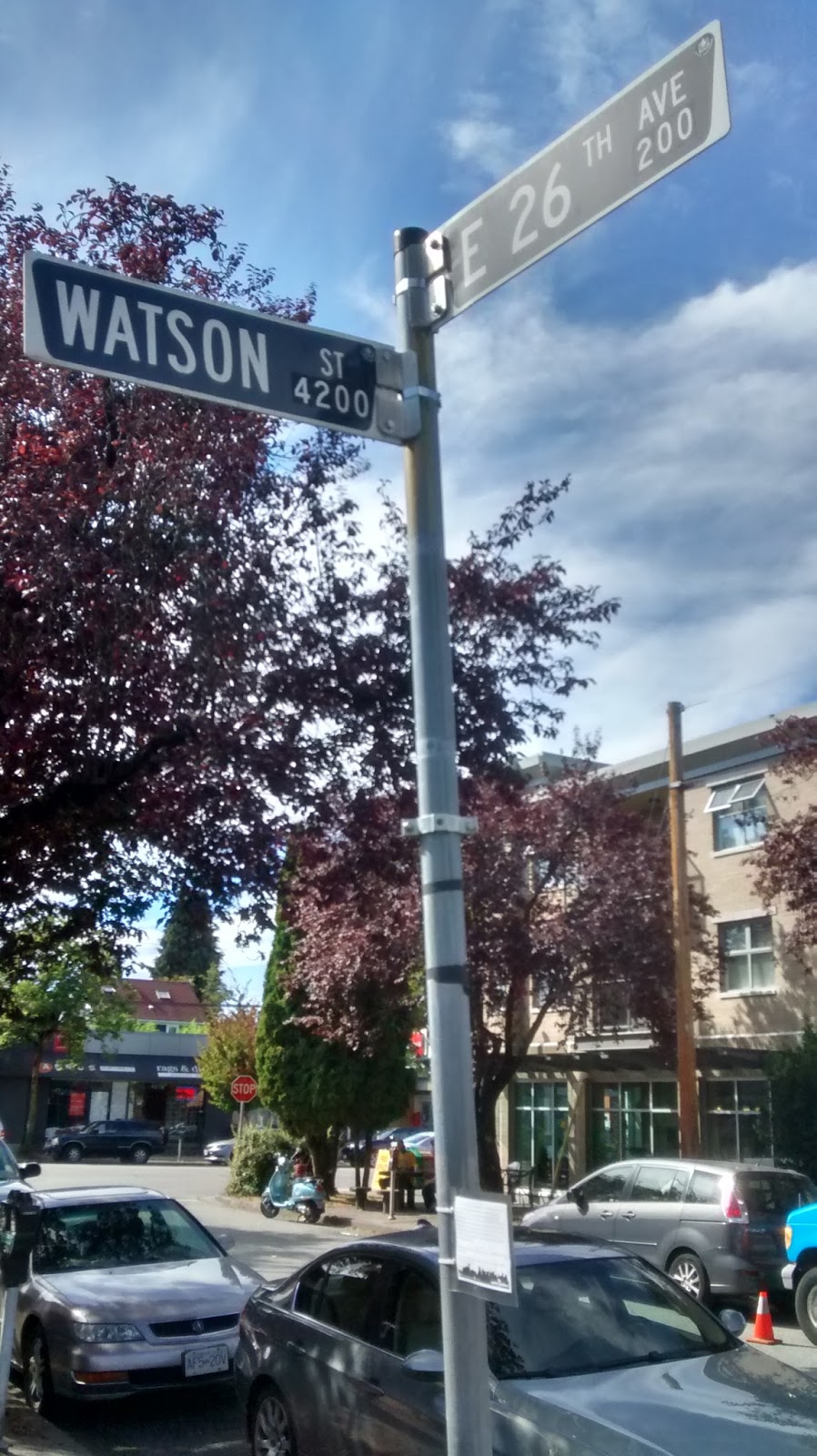 Here I am, apparently having plotted a course for story node number three! But you will require Blade Runner skills to enhance and rotate the card enough to read its contents. 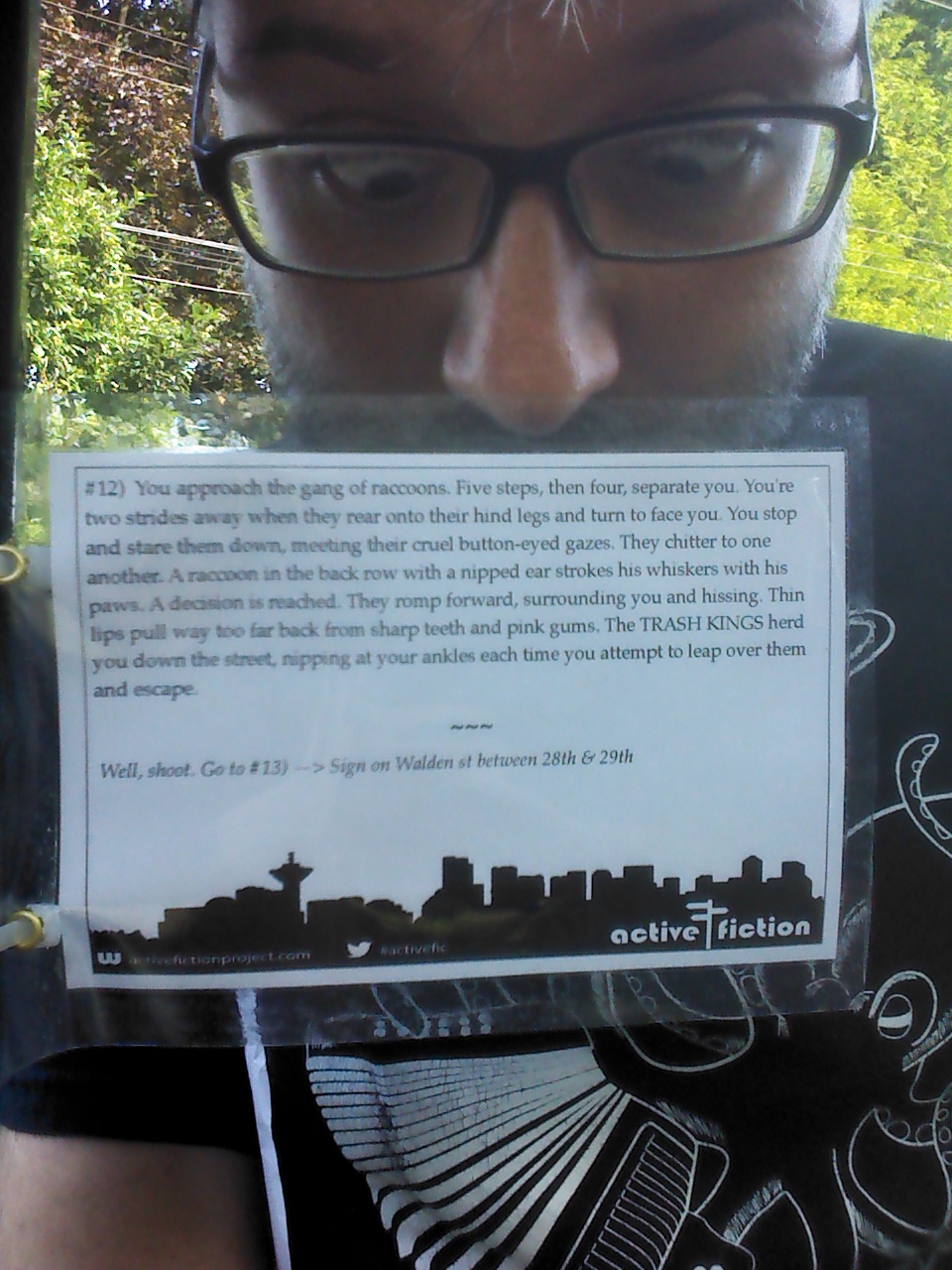 Outraged I am outraged at a story node that offers no branching, only redirection to a subsequent node. (Nice shirt, though!) But this does reveal some key players in this little story, the TRASH KINGS cadre of outlaw raccoons whose sinister plots (I love the revelation in node 14!) impact everyone living in the area. 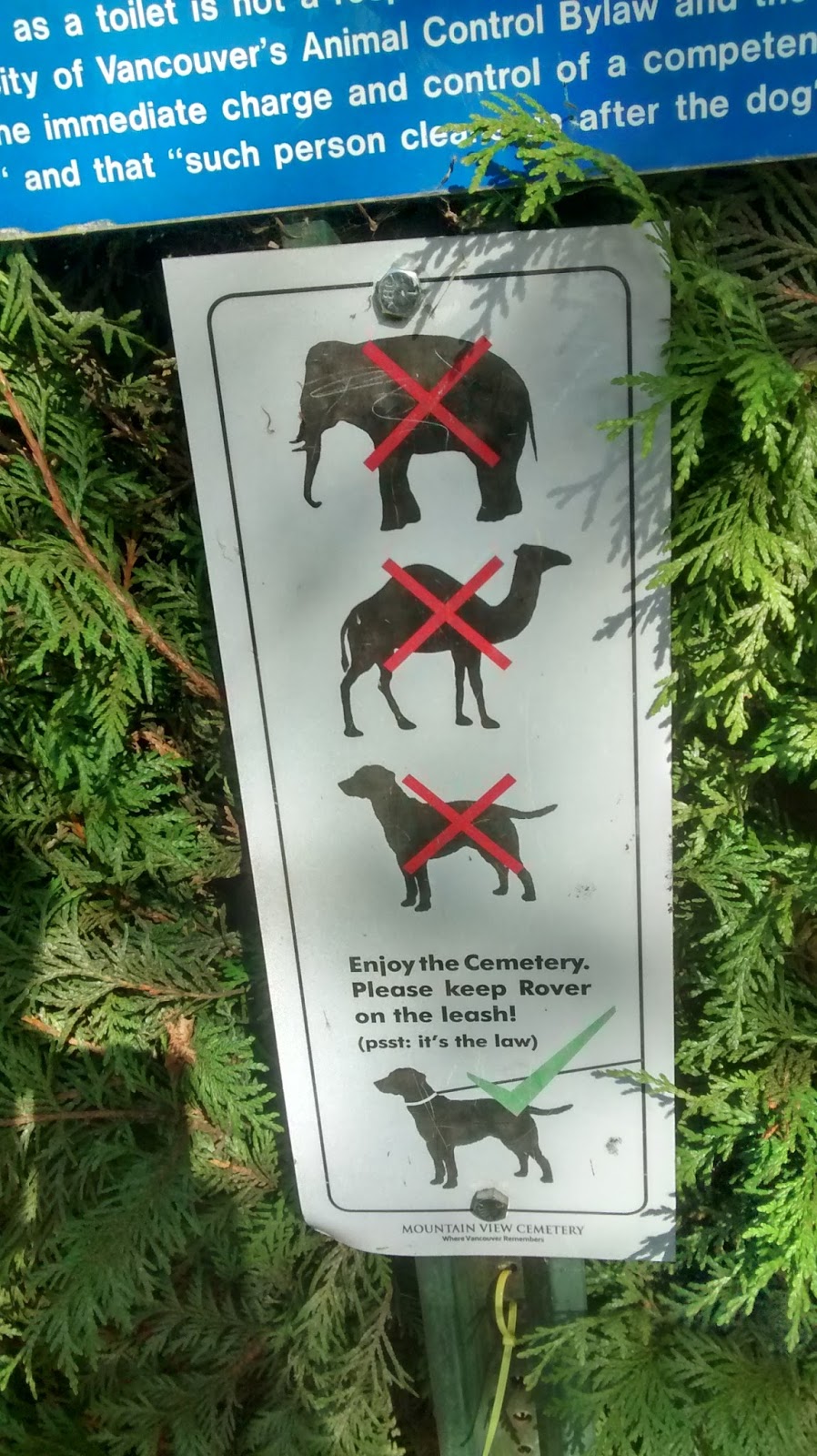 The story optionally leads readers to the cemetery again (the protagonist goes in; the active readers enjoy the account from a respectful distance). This isn't a story node (more's the pity -- what a story you could make of it!), I just appreciated the humour on the graveyard signage. 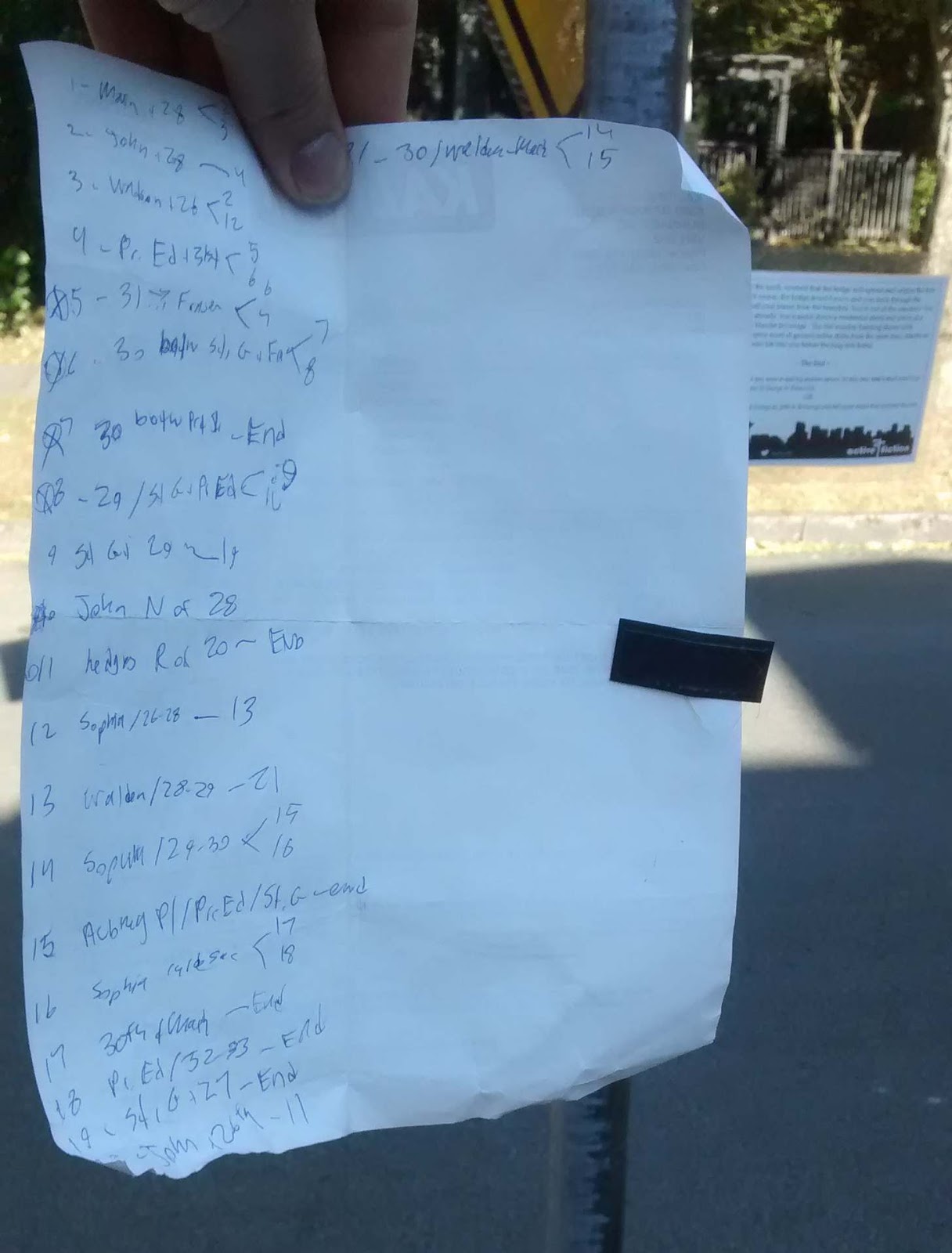 I completed my collection, checking off my final missing node, number 11, after enjoying its spectacular approach. Here you can see the messy process by which a neurotic approaches this completionistic exercise with rigor, a complete log of story node numbers, locations, and accounts of which nodes they lead to. This page contains everything needed to make a story map without anything actually in the story. Sorry, the story is lovely and this is all just sausage-making, but I felt it was curious enough to share.

And that's a wrap for Active Fiction story #3, with hopefully many more to come following their call for submissions a few months ago. The time seems to be ripe for people to leave their houses and bodily engage with hyperfiction: Brett Joliffe has been running a series of "Choose Your Own Adventure" nights at the Astoria Pub, spicing up a monthly night at the bar with games, stories and a nostalgic theme. As having kids has made me instantly decrepit, I haven't made it out to one of them yet, but I'm looking forward to conducting some reconnaissance and reporting back to you, my long-ignored hypothetical readers. That's all for now, so be well and choose on!