2000 views!  What are you people doing over your holidays, catching up?  The long tail is weird, seeing the counter continue ticking up while I'm elbow-deep in trying to come up with some new content.  (Next up will hopefully be WAS Emily Short's A Dark And Stormy Entry, though there's a lot of work yet to be done there.)
Well, here's something new -- my loving partner (who has a great blog of her own, somewhat on hiatus, looking at radical feminist publications) got me an obscure gamebook for Christmas, Entangled, a DIY 'zine self-published with a photocopier (a genre turning out to be a surprisingly rich vein, however empty Etsy now is to us, with surprise items like the previously-posted-here Choose Yer Aventure -- I guess that before the revival currently in full swing with actually-published gamebooks and ebooks, that was their only outlet.) It was an adaptation of artworks the author, one "ladypajama", exhibited at a show in Missoula. Here are its title page and its opening choice: 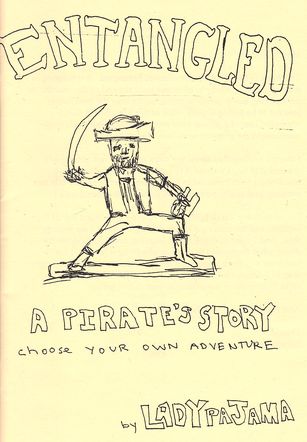 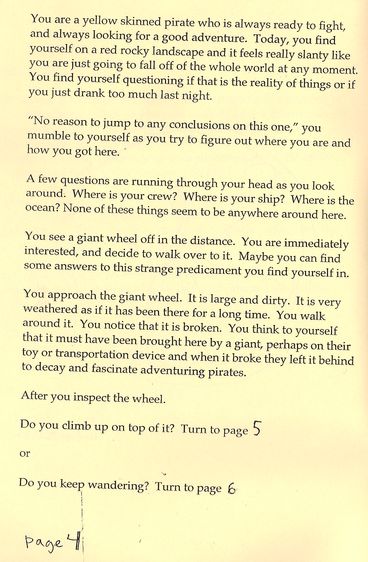 I won't post the full thing (at least, not for a while) since I don't want to cut into the author's ability to sell this thing -- but once it goes out of print, who knows! I didn't think that anything was going to shake Nintendo Power magazine after 24 years in print, but it looks like my ripping the Dragon Warrior Text Adventure from its pages was the straw that broke its back!

In any case, I did need an excuse to make a new post so I could hype this meritorious Kickstarter project, occasional Fighting Fantasy author Jonathan Green's history of the FF series, You Are The Hero. It's not funded yet, with a little time left on the clock, but who knows -- if you help it come to fruition, you will indeed by the hero!
I do administer another blog here on Blogger, with a focus on analysis of ads for old video games I found in my comic book collection prior to liquidating it. Once in a while I did however find some interesting ads related to this blog, so I will share one here. Much as we're celebrating a milestone here, that blog, Shilling Epilepsy to Mouth-Breathers, also just celebrated 4000 views -- the posts are easier to make, something I can do with half a brain before passing out at night rather than something I have to painstakingly format and test before sharing, as with even the simplest gamebook conversions here. So here's a half-a-brain analysis of this ad for the Endless Quest line of Dungeons & Dragons CYOAs: 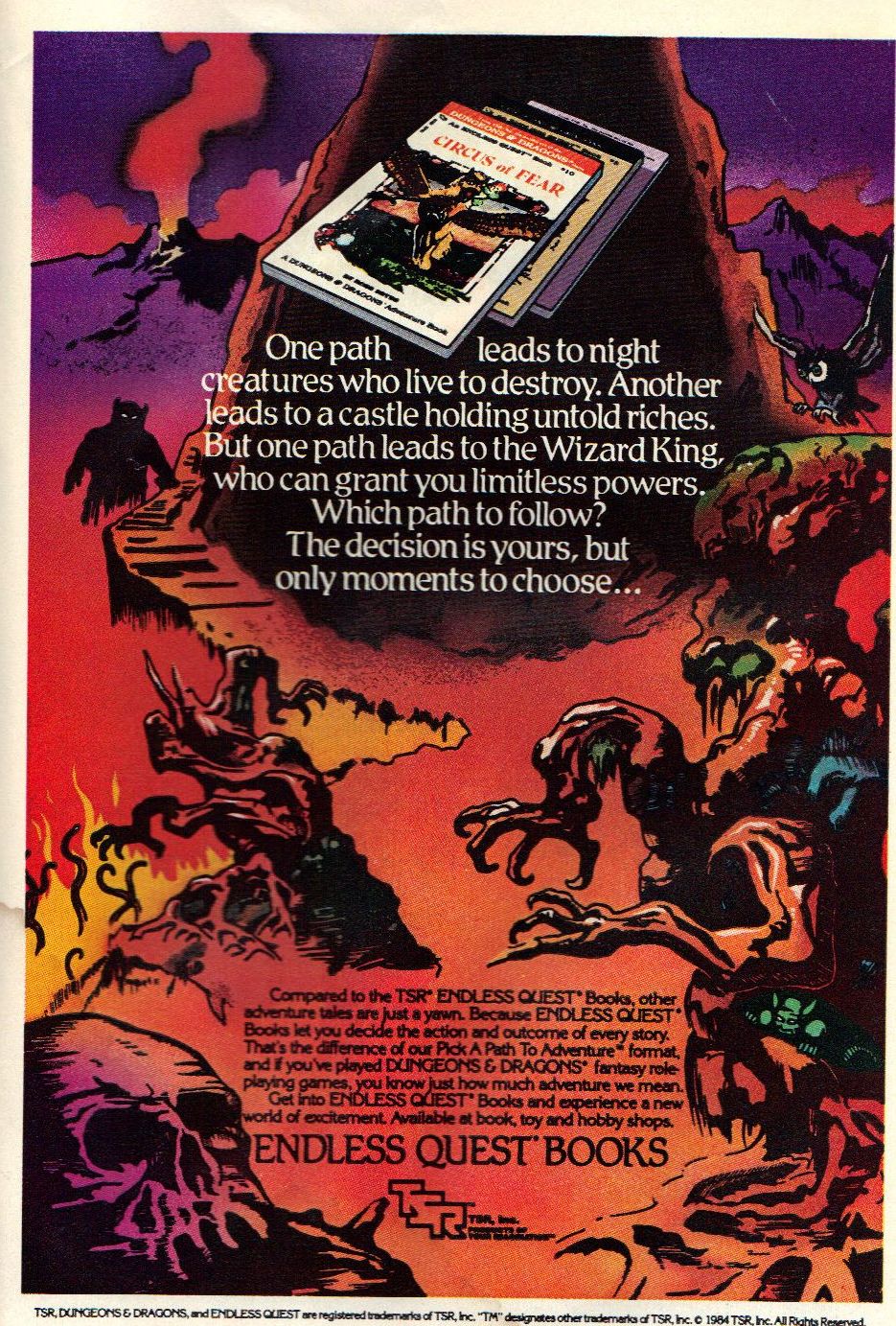 One path leads to night creatures who live to destroy.  Another leads to a castle holding untold riches. But one path leads to the Wizard King, who can grant you limitless powers.  Which path to follow?  The decision is yours, but only moments to choose...
Compared to the TSR Endless Quest Books, other adventure tales are just a yawn.  Because ENDLESS QUEST Books let you decide the action and outcome of every story.  That's the difference of our Pick A Path To Adventure format, and if you've played DUNGEONS & DRAGONS fantasy role-playing games, you know just how much adventure we mean.
Get into ENDLESS QUEST Books and experience a new world of excitement.  Available at book, toy and hobby shops.

On the left, shadowy nightmare beast at the end of a staircase to an erupting volcano. On the right, a hunting owl. Further to the foreground, gnarled trees; on the right, one harbours a small green imp, while the tree to the left grows next to a gout of flame. Foreground left, a misshapen skull of some humanoid race. Sadly, this 1984 ad doesn't give me much to work with in terms of scorn and derision, which generally makes for more humorous posts. By the end of '84 this series had already published 25 volumes, slightly over half its 49-book run through TSR-owned and -licensed intellectual properties: not just Dragonlance, Greyhawk, and Forgotten Realms but also Gamma World, Star Frontiers and Top Secret and even Conan the Barbarian. The somewhat thankless job of cranking them out largely fell to Rose Estes, who I think did a good job at using the settings to tell gentler, different kinds of stories than the ones for which they were intended -- ones with children protagonists and talking animal sidekicks in which entering into combat is only very rarely the course of action the story wants the player to pursue.

In this ad Endless Quest is comparing itself to conventional books, deftly ducking what makes it different from its competing gamebooks in the then-burgeoning genre. (The only ace up their sleeve was the use of the D&D campaign settings and the cachet the association lent them. God knows what havoc R.A. Montgomery would have wreaked had he licensed D&D worlds for Choose-Your-Own-Adventures...

Ah, but I digress. Thanks for hanging in there, and hopefully I'll have some new gamebook conversions for you before too long!