When I saw this I thought, "gee whiz, what a great idea!" 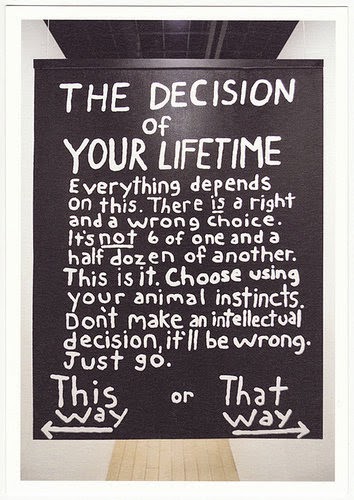 THE DECISION
of
YOUR LIFETIME

Everything depends on this. There is a right and a wrong choice. It's not 6 of one and a half dozen of another. This is it. Choose using your animal instincts. Don't make an intellectual decision, it'll be wrong. Just go.
<- This way

Then I got kind of resentful that I'd missed Miranda July's 2008 installation "The Hallway", and that it had not been documented in such a way that I could experience it vicariously after the fact. And, oh yes, I was unlikely to have been traveling to Japan in order to experience it in the first place, it's true. Forget you, Miranda! But it turns out that other groups (like these Chromatin folks) have been mounting similar ventures in nearby places and... d'oh! That was here in my hometown just over a month ago and somehow the word never got to me -- I, who by all rights should have been the first one notified! But while listening to an unrelated news broadcast on the radio, I was tipped off to The Active Fiction Project and their still-warm CYOA installation on my city's fair streets. Rushing to their website, I found the location of the starting node and embarked upon an adventure... 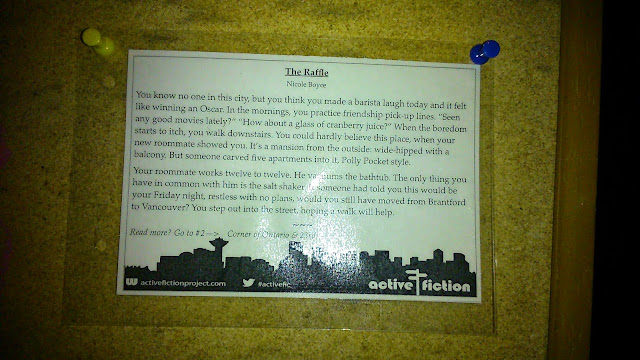 You know no one in this city, but you think you made a barista laugh today and it felt like winning an Oscar. In the mornings, you practice friendship pick-up lines. "Seen any good movies lately?" "How about a glass of cranberry juice?" When the boredom starts to itch, you walk downstairs. You could hardly believe this place, when your new roommate showed you. It's a mansion from the outside: wide-hipped with a balcony. But someone carved five apartments into it, Polly Pocket style.

Your roommate works twelve to twelve. He vacuums the bathtub. The only thing you have in common with him is the salt shaker. If someone had told you this would be your Friday night, restless with no plans, would you still have moved from Brantford to Vancouver? You step out into the street, hoping a walk will help.

Launched a couple of weeks ago by the Vancouver Public Space Network (and framed confusingly as a "Jane's Walk"), this story is a pilot work of site-specific interactive narratives telling tales informed by the neighbourhoods in which they are situated. I rushed out to document all of the story sections while they were still up, so that the story could still be enjoyed by the gamebook fans who subscribe to this blog, but in deference to the author or committee of creative writing students who assembled this work of real-life hyperfiction, I will refrain from spoiling it further until the option of experiencing the tale in person is no longer possible. Hats off, Active Fiction Project! Everyone these days is talking digital gamebooks, but these folks have taken the absolute opposite tack: gamebook as augmented-reality-game. Now I just regret I hadn't made one first, and wonder how I can get in line as an author.
Posted by Rowan Lipkovits at 5/07/2014 09:45:00 PM