Though no one has gone so far as to actually comment on my recent RFC blog post, I have received some interesting suggestions on Google+ and Facebook for audience-led decision-making mechanisms in live musical performance. In addition to revisitations of the card and text-messaging systems, some of the new highlights include...

"Darts!" A wheel-of-fortune-esque random determinant, perhaps invoked by audience throwing ability. Also lends a degree of knife-thrower suspense, especially if the dart board is mounted on an instrument! But only with extraordinary throwing skill can the selection said to be "chosen" rather than "arrived at". If we just wanted random seeds, there are all sorts of ways we could generate them. (Chickenshit bingo!)

Programmes are red on one side, green on the other. Audience holds them up to vote.
Giant blow up ball tossed into the audience. Whichever side of the room it's on at the given moment, dictates the choice.
A soloist stands up and solos as long as at least one member of the audience is standing as well.
Key members of the audience are given different coloured balloons with helium. When they are released to the ceiling, different events happen.
A dog is allowed to run freely around the room. It's actions affect the score.
Audience sings. Higher notes give one choice, Lower another. Volume and enthusiasm sway the vote.
Audience is encouraged to get up and move a prop on stage to affect the direction of the music. Ie. a rock in or out of a circle, a figurine in a diorama, an angel and a devil to indicate what the main character would do.
And if any of that fails, live tweeting via smart phones.

Matthew Schuler presented a brilliant scheme that not only involves the audience in the decision-making, but also in the performance itself:

"are you intending to present the choices in the chorus, then use that decision to select the text of the next verse? a call and response maybe, giving one choice one line to sing either against or after the other﻿?"

These are all valuable food for thought, confronting me to question which elements of the performance and interactivity are most important to me. There will be further reports in the future, to be sure.

In the meantime, between this scheming and the runaway success of my most recent CYO conversion here (well on track to be the blog's most popular post by a factor of two despite the long tail advantage the other posts cherish) this blog is overall well on the way to achieving its next thousand-views milestone, a kingly 3000 views. (I know, we're no Slashdot here, but considering that's roughly 2998 more views than I ever expected to garner, I think we're doing pretty well here.) At our last millennial milestone I turned over a leaf from my video game ad blog and posted an ad for a gamebook series. Well, while perusing a pile of '80s basement Dragon magazines for lack of comic books to cannibalize, I've since found a much better quality version of that ad -- oftentimes you'll find two versions of the same ad for printing on different grades of paper stock: good ad on the inside cover, crappy ad in the middle. This version is so swell it makes the earlier post look like a water-damaged cocktail napkin concept sketch! 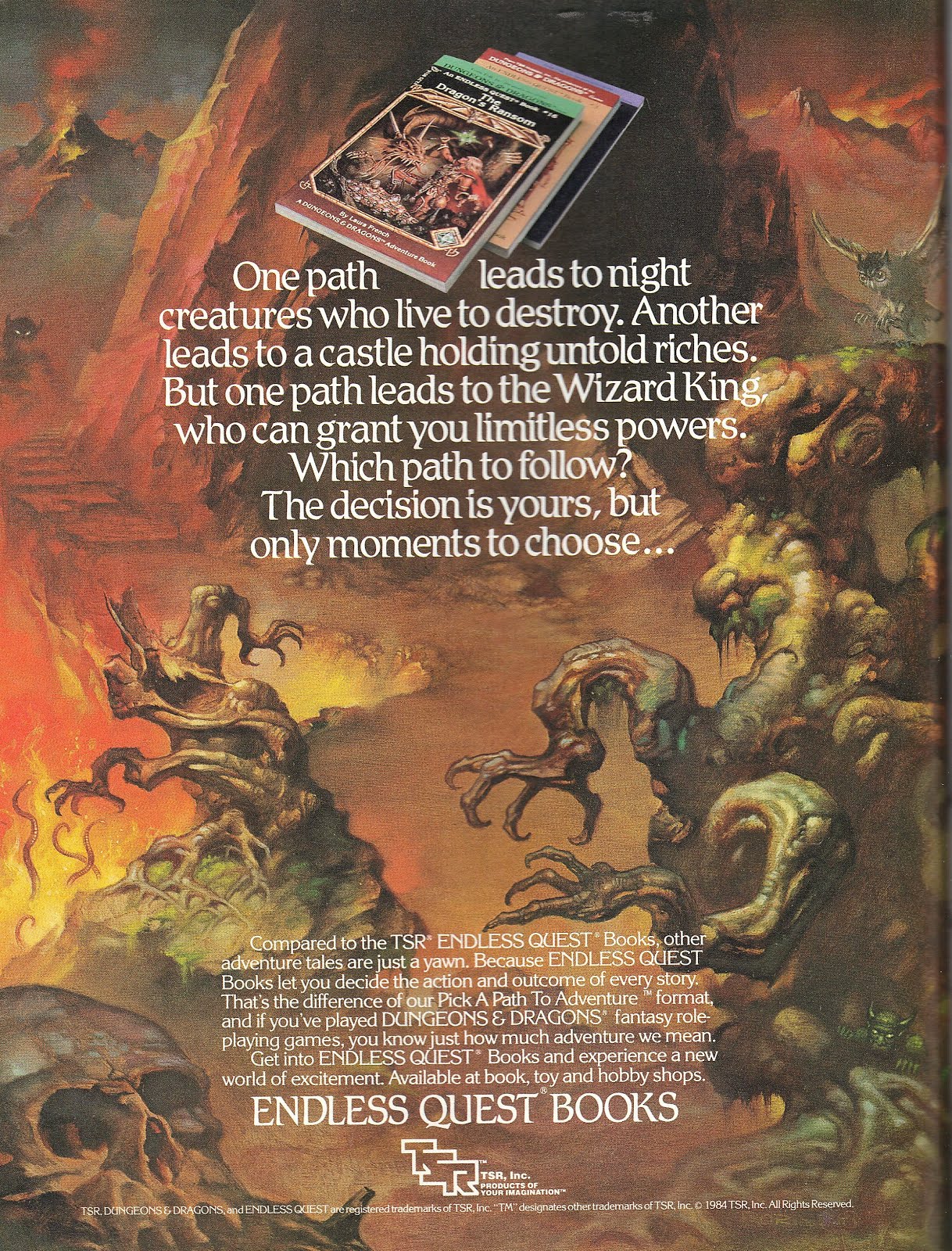 They may have been waiting a while to come up with enough scratch to pay for the higher-quality version of the ad (did TSR really take money out of one pocket into another to advertise their own projects in their house organs? a zero-sum philosophy I often opine upon when observing Ripley's Believe It Or Not promoted on Pattison billboards -- ah, but I digress!), as this ad features later books in the series in the thumbnails at top centre.

These gamebooks weren't such valuable commodities however that we don't see them a few pages later being given away for free -- including the very volume featured in the rough-sketch's showcase spot, Rose Estes' Circus of Fear, a volume I credit with imparting into myself most of the (admittedly scant) carnie knowledge ("Hey, rube!") I relied on when writing a (abandoned) circus-themed comic book series a decade ago. But only one digression per post! 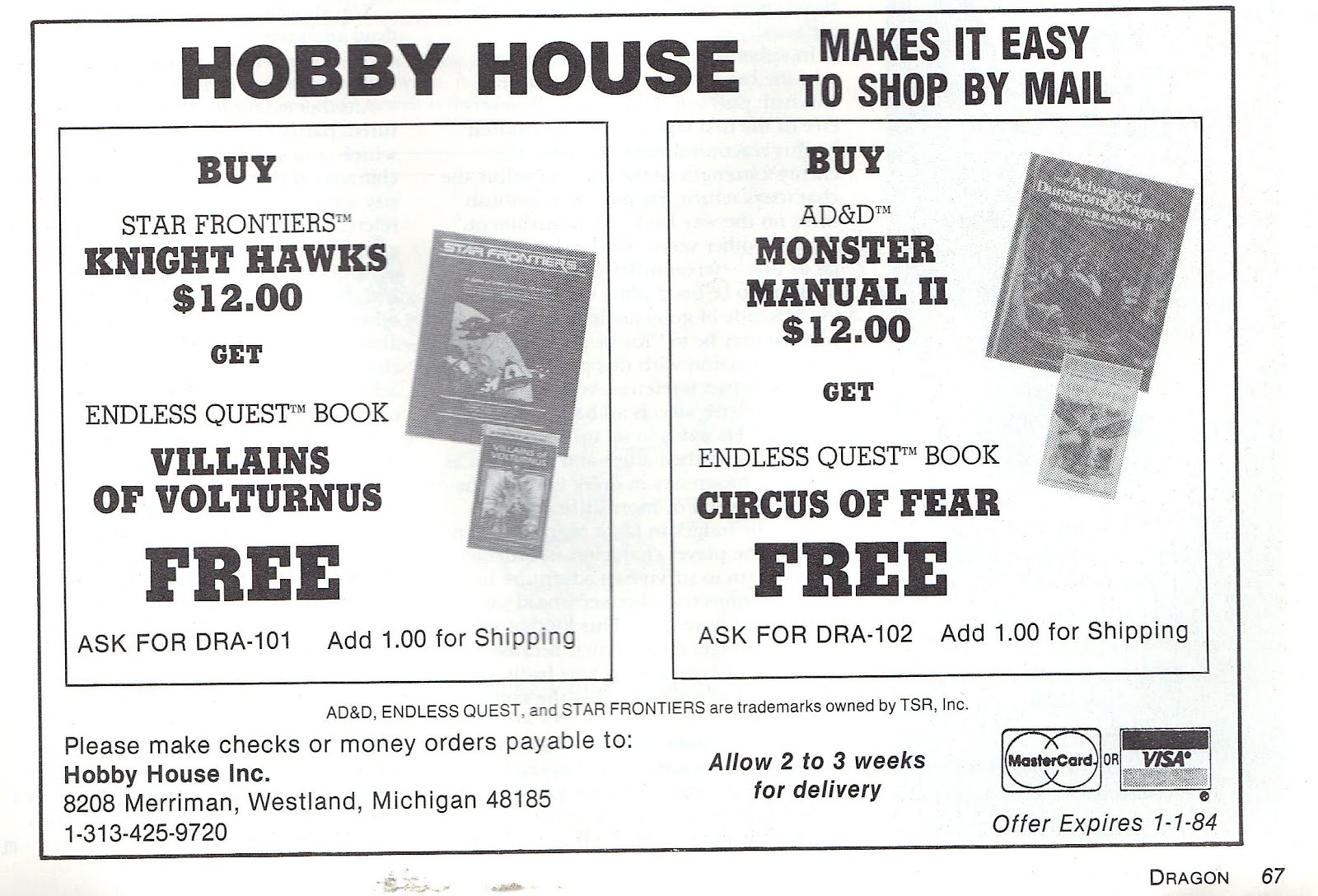