Quite a while back I passed the 5-thousand-blog-views milestone, but my activity here is so logey that the hundreds have continued to mount without me commemorating it in any way here. How ungrateful! As I recount every thousand views, I never expected to find any readership at all, so again I must thank you all, in your patient RSS-subscribing. (And what will you do when Google Reader keels over at the end of the month? I haven't yet come to terms with Feedly or Theoldreader but they seem like the going concerns. I suppose I'll learn to swim when I'm thrown in the water.)

I have a brief April Fool's "solitaire gamebook" for you from pages 44-45 of the April 1985 issue of Dragon Magazine, pertaining to transitioning out overpowered PCs. (Something I found while digging around for info on PBM games, a whole other rabbit hole.) It's wholly nominal, alas, but sufficiently noteworthy to turn up on gamebooks.org. But before I share it with you, first -- some gamebook-y links! I've been sitting on this one for a while, in the "Stupid Twine tricks" file: A Journey Through Finnegan's Wake! (I shouldn't complain, I've been plotting something virtually identical with some Melville...)

On a more serious note, blogger Lesley Kinzel gives you a chance to walk two harrowing blocks in her shoes, through a world in which everybody feels entitled to comment on the bodies of women. (Also Twine!)

One last link, not hyperfiction itself, but a look back at the image branding of the Time Machine series of gamebooks!

Nogard - The high-level adventure to end all adventures

Welcome to Nogard, a solitaire scenario for the AD&D game designed specially for player characters of ultra-high level and world-shaking power. The adventure takes place in an environment unlike any that your character has ever experienced, and you and your character will both face challenges that you never thought were possible in an AD&D game adventure. And all of this is achieved without once placing your favorite incredibly powerful character in jeopardy. Your player character can't help but survive a journey through Nogard -- but his life will never be the same again.

You will serve as both the player and the Dungeon Master, so to speak, in this solitaire adventure. Except for your character's record sheet and a pencil (which you'll need only briefly; don't bother to get up for it now), no materials are needed to run this adventure other than the rules you are reading. Begin by setting the scene with the background, then start with Section I of the adventure itself. After you play through the events of a section, turn to the section you're directed to at the end of that passage. At times, you or your character will be called upon to make decisions -- but you always get as much time as you need to make up your mind. There are no tricks, traps, or unfair surprises in this scenario.

Nogard is actually four adventures in one -- certain passages in the text are read differently for cleric, fighter, magic-user, and thief characters. Depending on what kind of character you're running, insert the appropriate passages where indicated. To revive the adventure after several play-throughs, try mixing passages for different classes for a completely different adventure every time.

In your career as a player character, you have not simply reached the pinnacle of achievement -- you have defined it. But for years now, ever since you became

life hasn't had as much zest as it did before. Your accomplishments are unparalleled, your talents beyond compare and your riches beyond counting -- but all of it is coming to mean less and less. Lately, you've found yourself wondering whether you can ever feel challenged or motivated again.

Being a person of tremendous intelligence and wisdom, you decide that there must still be challenges unrealized for you, because it doesn't make sense that someone as powerful as you should be forced to be this miserable. Then, one day, it happens. Just as you concentrate mightily, trying to figure out where this place of challenge is and how to get there, a sharp noise resounds (like the sound of a book being closed) and you are whisked away.

I: After a journey that takes only two eyeblinks longer than teleporting, you find yourself in the middle of a large expanse of gray space. Amazingly, you have arrived in a state of full readiness -- equipped for any adventuring challenge you meet. At your feet are some of your most prized possessions, including

You don't see much going on, but that doesn't lull an experienced stalwart like you into a false sense of security. You know this is an adventure, and sooner or later something is bound to happen to you if you simply: 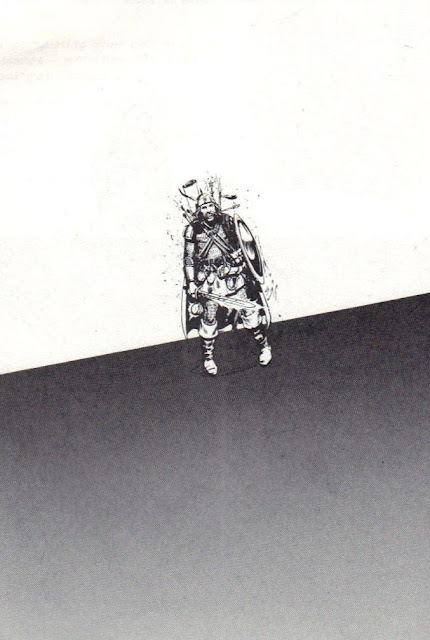 II. After a while, you start to get bored with just standing there, so you sit down.

III. Sitting doesn't seem to help. Neither does pretending your asleep. You decide that nothing is going to sneak up on you, so you start to move toward the gray area in the distance. It doesn't take long to notice that everything is a gray area in the distance. You become even more watchful, thinking that attack from an unseen enemy could come at any moment. The suspense is building -- surely this will be a tale to regale even the most jaded of your friends back home!

V. There is no Section V.

VI. You aren't sure how much longer you can stand this horrible combination of suspense and boredom. Once in a while you search furiously for some way out of the gray, but that never takes long because there's nothing to look at. You've even considered doing away with yourself as a way of escaping, but

The pressure is getting unbearable. You're not sure if you can stand even another minute of this existance...

VII. Being an adventurer of ridiculously high intelligence and wisdom, you must have figured this out by now. But just in case, a voice booms out this brief message: "This extended vacation in Nogard comes to you through the combined efforts of the Gods of Game Balance. You do not need the assistance of your player for the remainder of this adventure. Proceed to Section I, and be on your guard -- something could happen at any minute."

Epilogue: For player's eyes only

While your character goes back to Section I, you should read and follow the instructions in Section VIII.

VIII. Go get the pencil we said you'd need. Across the top of your character sheet, write the word "Retired." Get out your next most incredibly powerful and awesome character and start the adventure over again. At least this time you won't have to get up in the middle to find a pencil.