Often the question is asked: why did gamebooks decline as home video games were on the ascendant? Were their trajectories related? This item doesn't answer the question, but it does demonstrate that you can't hitch a ride up when you're on the way down. Since March/April of 1990, this little choose-your-own episode has languished without a machine-readable form. But could the world really do without Nintendo Power magazine's 4-page promotional gamebook for Enix's Dragon Warrior for the NES playable through your web browser? Well, probably. (Note: arrrrrrgh! I do my best to avoid reduplicating the labours of others, as the merit of someone converting one of these even once is debatable let alone twice... but as I started this one offline I failed to verify that no one else had transcribed the lousy thing yet! But mine has the original magazine illustrations -- lossy screenshots -- and is all laid out on a single page to justify itself. But I will be using Google more judiciously in the future before I undertake further conversions. Chee whiz, I bust my hump in an effort to provide Google spiders with exclusive content! My coffee break today could have been invested into marking up a totally unrepresented hypertext! Ah well, I'd better get over myself... but it always stings to be beaten to the draw by one of the cultural vanguard on a Tripod account.) 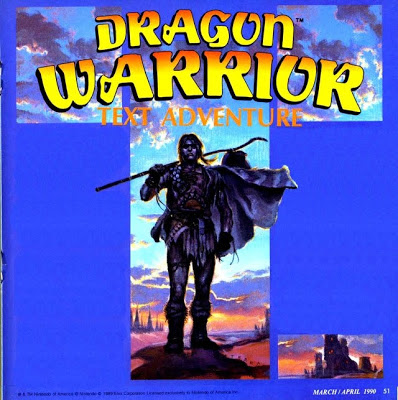 Dragon Warrior Text Adventure
Have you ever wondered how decisions are made in a Role Playing Game such as Dragon Warrior? In this text adventure you'll see how your choices lead to particular results. It's the same sort of process that's at work in the computer chips of your NES -- what we call "if, then" statements. This is also a good way to learn about the strategy of Dragon Warrior and have some fun.
Rules of the Game
As a warrior about to set out on a quest you have 10 Hit Points (HP), 0 Magic Points (MP) and 120 Gold. Read what happens in each frame, then either choose from the list of options or go to the frame number indicated if there is only one option. When attacked by monsters your HP will be reduced, and if it reaches 0, the game is over. Your success depends on how well you make decisions and how well you remember wrong turns and dead ends. There are many dangers, and the choice that works once may not work in a different situation.

As the descendant of Erdrick, a great warrior of old, you are about to set out on the first leg of a quest to defeat the Dragonlord who has taken over the Kingdom of Alefgard. You begin in Tantegel Castle and, as you stand at the gate, you must decide which direction to take.
. . .
1

Town of Brecconary: Buy a weapon and armor before setting out.
. . .
2 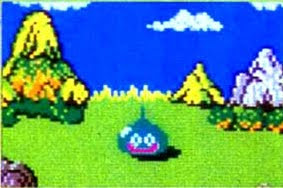 After a strong attack you defeat the SLime and receive 2 Experience Points and 1 Gold. You set out, this time toward the...
. . .
9
Attacking with your bare hands wasn't such a good idea. You inflicted 1 damage point while you received 5 damage points from the monster. Now what?
. . .
10

You have reached the town of Garinham and discovered that there is a locked door, behind which lies an important secret. You also learn that the princess is somewhere to the East. Where do you go?
. . .
39
Crossing the bridge you walk southward along the ocean shore where you see another bridge. Which direction do you go?
. . .
40
You really should go eastward.
. . .
41
Once you've crossed the bridge a Magidrakee appears, but it doesn't see you.
. . .
42
Heading West takes you into the Poisonous Swamp. With every step your HP goes down. What do you do?
. . .
43
Unfortunately, you haven't mastered the spell yet and you pass away in the bog. Alas.
. . .
44
In the eastern desert you encounter a Scorpion.
. . .
45
To the North you see a town. You head toward it, intending to rest at the Inn and restore your strength.
. . .
46
You are in the Poisoned Swamp. What should you do?
. . .
47
The Scorpion's attack inflicted 5 damage points while you gave it 8 damage points. What do you do now?
. . .
48
You are attacked and lose a great deal of HP. You need to return to the town and recover. Which direction do you go?
. . .
49

Weakened from battle, you come upon a cave and, with a lit torch, enter. There a Druin attacks from the shadows. Your HP is down to 5. What do you do?
. . .
54
Your attack gave the monster 20 points of damage.
. . .
55
The attack on the Skeleton leaves you with only 6 HP and 0 MP. The Skeleton received 6 points of damage.
. . .
56
The enemy has cut off your retreat and attacks!
. . .
57
Your Hurt spell inflicted 8 points of damage while you received 10 damage points.
. . .
58
Your attack gave 7 points of damage to the enemy and you sustained 6 points of damage.
. . .
59
Using the Hurt spell you inflicted 10 points of damage, but received 6.
. . .
60
Alas, you have died without completing your quest.
. . .
61
You have escaped and, after recovering your strength at an Inn, you are ready to go.
. . .
62
Your attack using the Club defeats the enemy with 15 damage points. Your level goes up to 7. Your Maximum HP is 39, MP 26.
. . .
63
You cannot use the spell because your MP is 0.
. . .
64
Congratulations -- You have reached a village where people tell you to go South through the Poisoned Swamp to the town of Rimuldar. But first you should buy a Copper Sword, half plate armor and a small shield. Also stock up on Herb for the long journey.
You have succeeded in overcoming the early stages of Dragon Warrior, just as you would in the real game. Congratulations. It is a game of choices and strategy, as you can see, and the further you go in this world the more you are able to do. Items must be found and mysteries solved, but you must also continue gaining experience against the monsters ot the Dragonlord.
Posted by Rowan Lipkovits at 11/06/2012 07:16:00 AM 3 comments: