Catching up... a CYO round-up of sorts 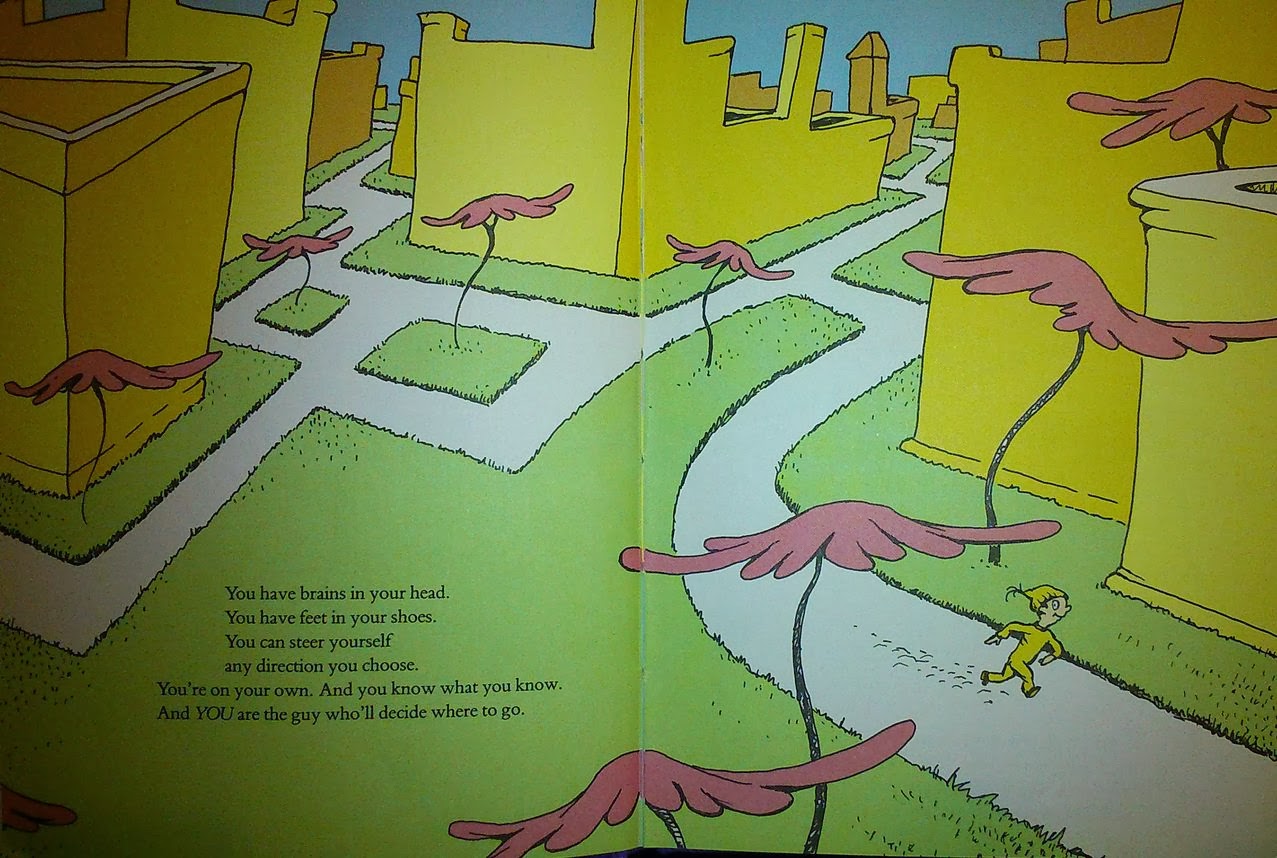 You have brains in your head.
You have feet in your shoes.
You can steer yourself
any direction you choose.

You're on your own. And you know what you know.
And YOU are the guy who'll decide where to go.

From my daughter's bedtime read this evening, Dr. Seuss' final book Oh, The Places You'll Go! I love the way this phrase (sorry for the crapola cameraphone snap, the scanner was. not. cooperating) not only establishes the overall 2nd-person gamebook perspective premise, but even echoes the particular way Fighting Fantasy gamebooks stressed reader agency on the backs of their books: the Kickstarted Fighting Fantasy non-fiction book is even named YOU Are The Hero.

But I digress even before I begin! First off, many thanks to all of my silent readers for helping to push this improbable blog past 10 thousand views! Overall traffic is low-ish, as is activity on my end, but then once in a while I will get 50+ hits to an individual "post" in a single day -- I like to believe it indicates one player lawnmowing one of the hyperstories hosted here. These conversions are proving to enjoy Long Tails, which is fine -- this project can continue providing something of some (niche) interest even if I go into hibernation. 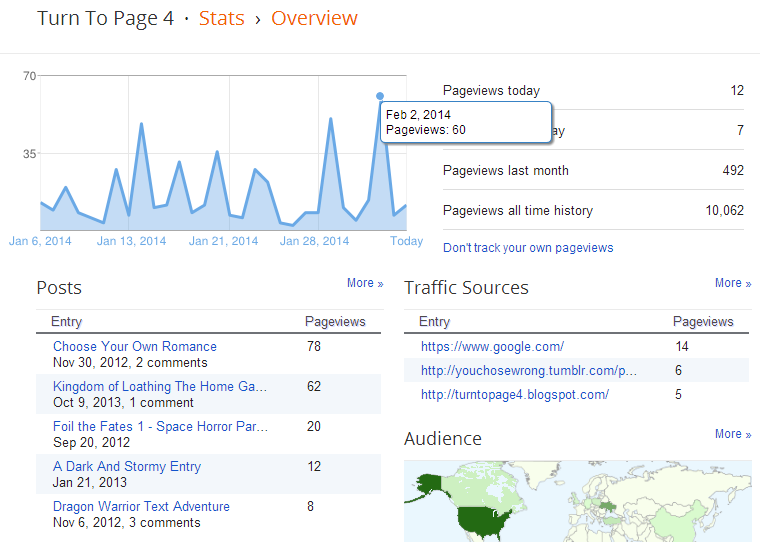 I know things have been slow around here lately. A handful of substantial works have stalled in late-stage conversion, there are slightly too many projects on the fly to give them all their due slice of my time, and by and large there just hasn't been as much time to fill -- regular work is better for my family than regular time off to webbify hyperfiction. Good for me, bad for you! My aspiration last year was to make a post here monthly; in 2013 I got 9 works up in 12 months, which is a 75% success, a grade of B! I doubt I'll be able to trump that frequency, the way things are looking; hopefully I can get new hyperfics up here somewhere between monthly and quarterly. (Every 6 weeks?) Then again, my most recent post was six months ago; I probably began work on this one two months ago, and it's not even a conversion! I might be better suited proposing to do four original hyperstories annually than twelve conversions, and could actually begin building up a portfolio of original work! Heavens forfend!

Now that my posts here have admittedly ground to a halt, the emerging gamebook community (I guess this generational cohort's nostalgia all caught up with them simultaneously) has found me and fingered me for some kind of locus hub. Thus this weekend (well, some weekends ago now) I was sought out by You Decide Games, offering CYOAs on such typical themes as zombie survival and such unorthodox ones as soccer manager. (Also, their electronic cover artwork is reminiscent of old iPod print advertising!) I'm the bearer of a freshly minted Android smartphone (well, not so smart, but at least kind of middlingly clever. Cannyphone?) and have been logging some time documenting the gamebook/hyperfiction side of the Google Play store, including some of these titles -- which largely appear to follow ZorkQuest-style "make one wrong decision and the story ends" forks. Preliminarily I can endorse Delight Games' series of Choice of Games knockoffs -- not perfect, but better than they need to be. Also hot off the presses, I was tipped off (and now so are you) to Anthony Lampe's "Explore-A-Quest" series, now up to volume five. I am wary of weighing in without access to full reviewer copies, but these appear to be classic-style stateless hyperfiction tales that just bifurcate merrily (a hyperfiction slogan if ever there was one: keep calm and bifurcate merrily) along on escapist themes -- the last of these even boasts its number of endings (an auspicious 13.) But what of valuing quality outcomes over quantity? Just kidding -- I'm as big a fan of piles of random crap as anyone else (maybe moreso, as you might guess if you ever get a chance to see my basement!) 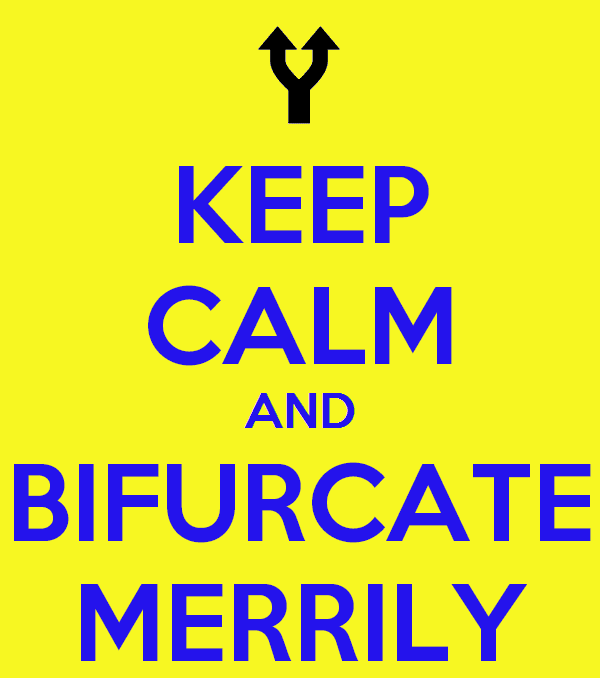 It's a good season to be a hyperfiction fan. A compilation primer, Fear of Twine, offers presently-exclusive free access to sixteen diverse works created using Twine, including some by some of my favorite indie game developers including Jonas Kyratzes and Pippin Barr. Also hot off the presses is the debut collection from Inky Path, a curated selection of seven previously-released interactive fiction, primarily hyperfictive in nature, made with a real wide-ranging diversity of tools. Also worth noting is that finalist voting for this year's XYZZY awards has just opened, and if CYOA-interfaced games were scratching at the doors in previous years (with Choice of Games' Zombie Exodus actually bursting the ballot boxes in 2011) now they are actively strolling around the place, overheard discussing changing paint colours and rearranging the furniture. Many of the finalists this year are hyperfiction stories (vs. the traditional text-parser Infocom-style games for which the awards have been traditionally presented) including works I've earlier endorsed here, including You Will Select A Decision, Depression Quest, Trapped in Time, Solarium, Solarium, Bell Park -- Youth Detective, as well as new-to-me works such as Horse Master and ones I never managed to gush about here such as Choice of the Deathless. Seeing which ones others nominate for awards is a good place to start your browsing, with the filler already culled from the list!

(On a passing Infocom text-parser digression -- the 30th anniversary edition of the Hitchhiker's Guide to the Galaxy text adventure has just been unveiled by the BBC, as gloriously player-hostile as ever. It's as worth checking out as ever it was!)

And since who knows if I'll wait another six months before making another post here (some, more canny, bloggers would have staggered all these news nuggets into 15 individual little posts rather than wadding them together into one tremendous sodden colossal heap, but that is simply not my way) -- my final note, a furtherly-digressing digression, an Indonesian CYOA conversion was brought to my attention. You hear that the gamebook concept makes a splash everywhere it is introduced, and in some countries and in some languages it takes its sweet time making its way over. The conversion is done using Quest's gamebook mode, and it appears to be a straight though unauthorized translation of the original book. Until they get someone fluent in Malay on retainer, ChooseCo may not even be aware of its existence! Chalk it up in the curiosity column.

And that's it for me for a while -- but hopefully not another six months! (If so, however, I've given you a lot to chew on here!) I actually have a minigame design in my head (even plotted out to cocktail napkin extent) for a contest ending eminently -- if anything comes of it and I actually get a chance to implement and submit it, rest assured you'll be the first to know.)