Active Fiction returns, now, on the other side of Main Street!

Back in May I reported (with perhaps a regrettable degree of detail) the exciting activities of The Action Fiction Project -- an exciting venture loosely affiliated somehow with the Vancouver Public Space Network (an organization that has brought me into other good times not related to the subject of this blog). In short, they commission neighbourhood-themed works of simple CYOA-style hyperfiction, with story nodes staggered throughout a part of town, urging adventurers to walk around to this intersection or that, looking for laminated cards on which the next portion of the story is printed. It's a great idea -- basically a low-tech ARG -- and one which shows great growth potential if piggybacked on to GPS or podcast technology. But for the time being, we're going low-fi -- for a hyperfiction experiment going live during the death of longtime Choose Your Own Adventure publisher and proponent R.A. Montgomery, simple seems a fitting homage.

These story nodes have been up for a couple of weeks now, and as the installation is time-limited, I don't know for how much longer they're going to remain accessible by the public. I have of course documented them for my private purposes, but you may be running out of opportunities to play the game in the field, as it was intended -- so if this interests you in the slightest, run, don't walk, to the SE corner of Main & 28th Avenue in Vancouver, BC. (I know, the weather isn't cooperating much. I had good luck during my three photo sessions.) Curiously, both instalments of the series to date have revolved around the Main & 25th area (a structural note: both also 20 sections long), but perhaps future episodes will venture further afield: start from the centre and work your way out! 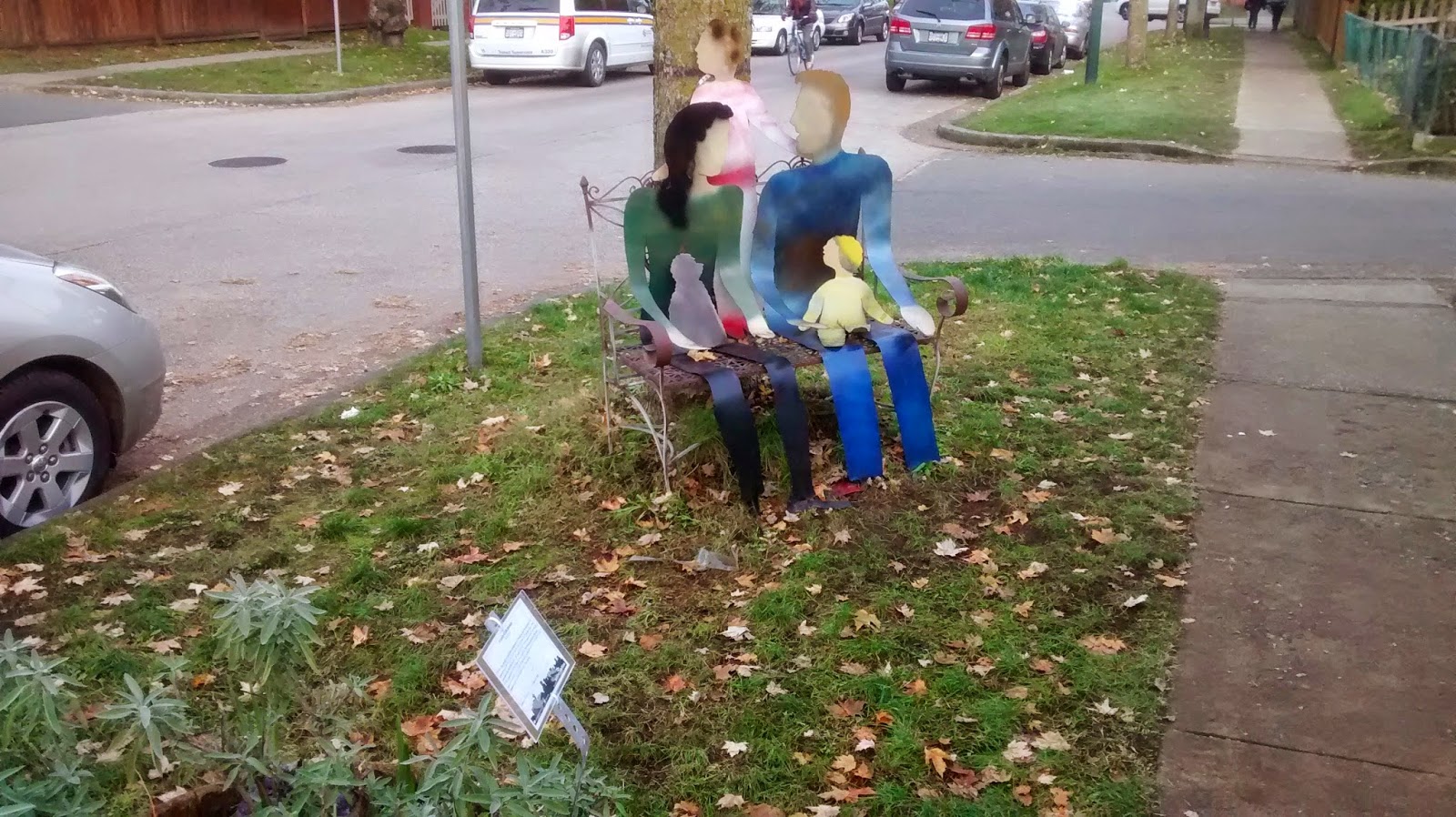 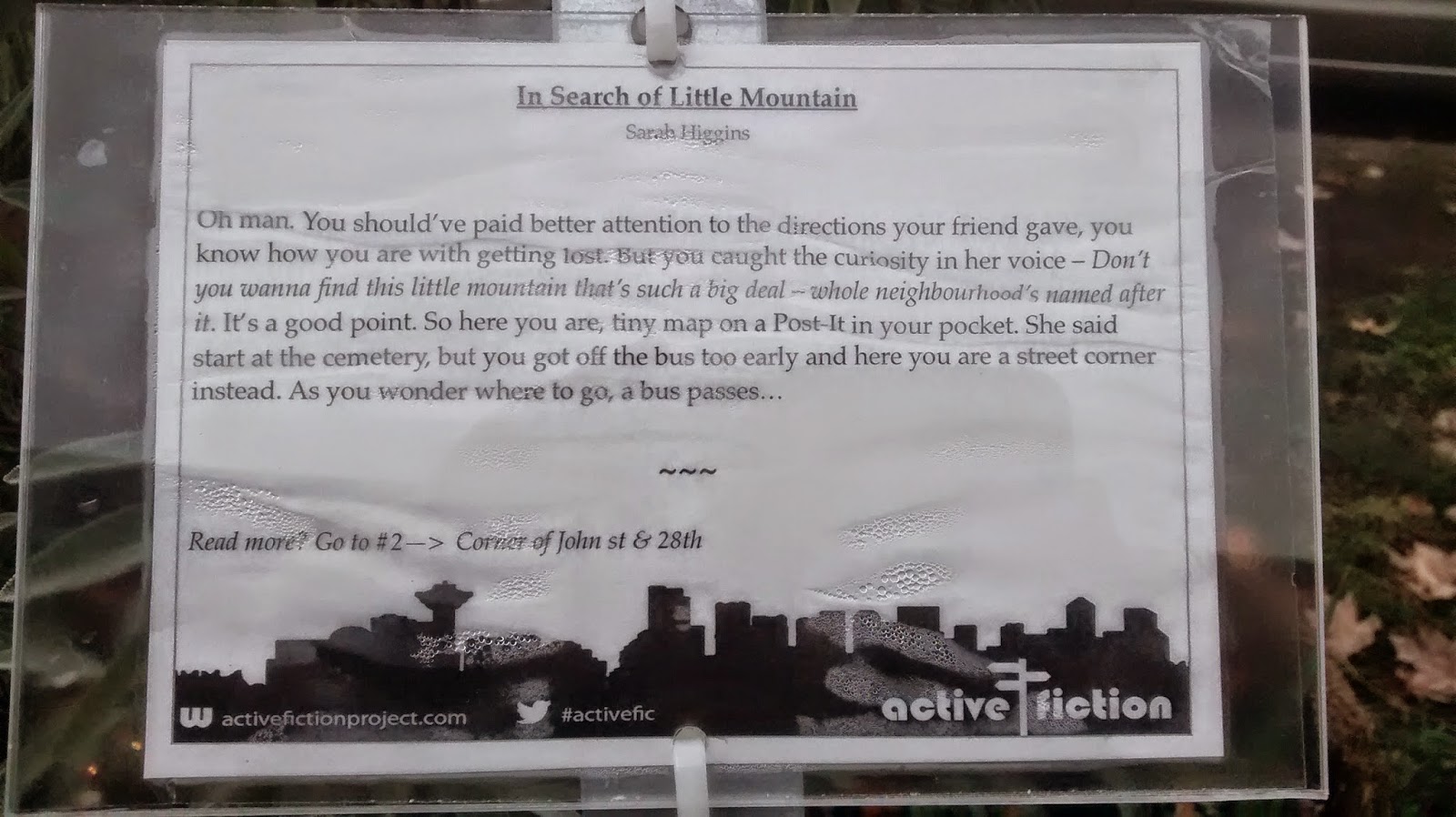 In Search of Little Mountain
by Sarah Higgins

Oh man. You should've paid better attention to the directions your friend game, you know how you are with getting lost. But you caught the curiosity in her voice -- Don't you wanna find this little mountain that's such a big deal - whole neighbourhood's named after it. It's a good point. So here you are, tiny map on a Post-It in your pocket. She said start at the cemetery, but you got off the bus too early and here you are [on] a street corner instead. As you wonder where to go, a bus passes... 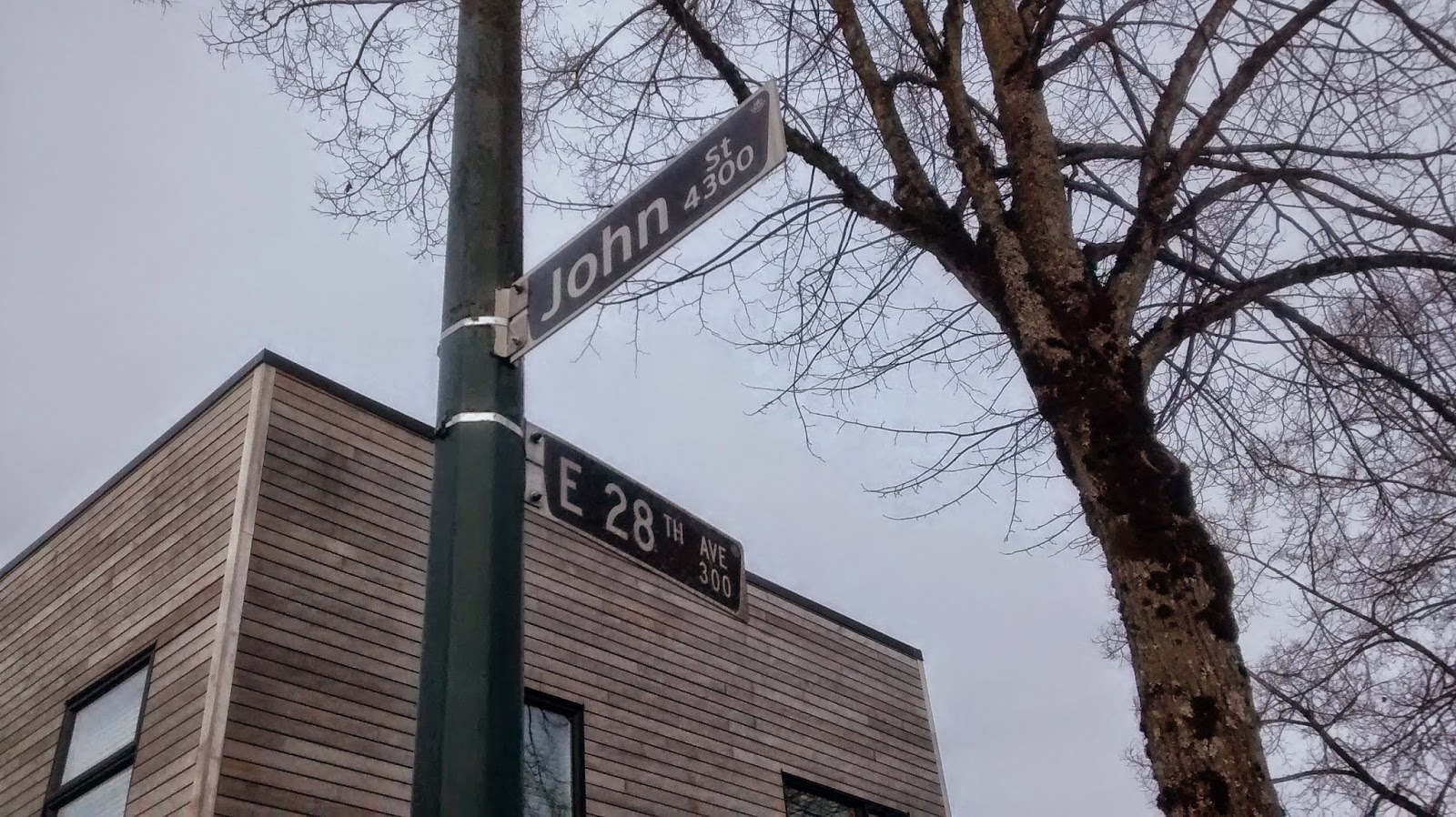 This must be the place! 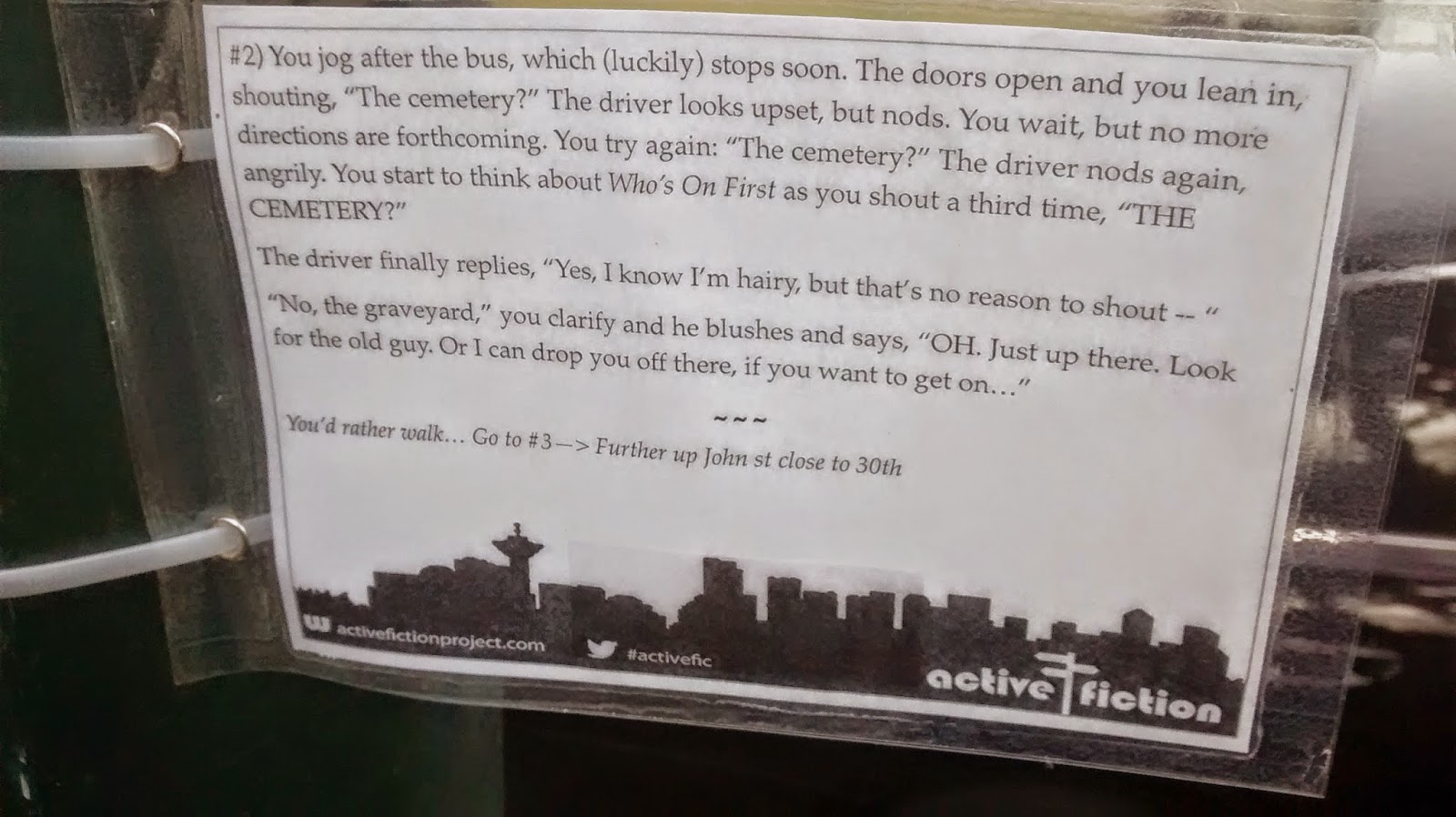 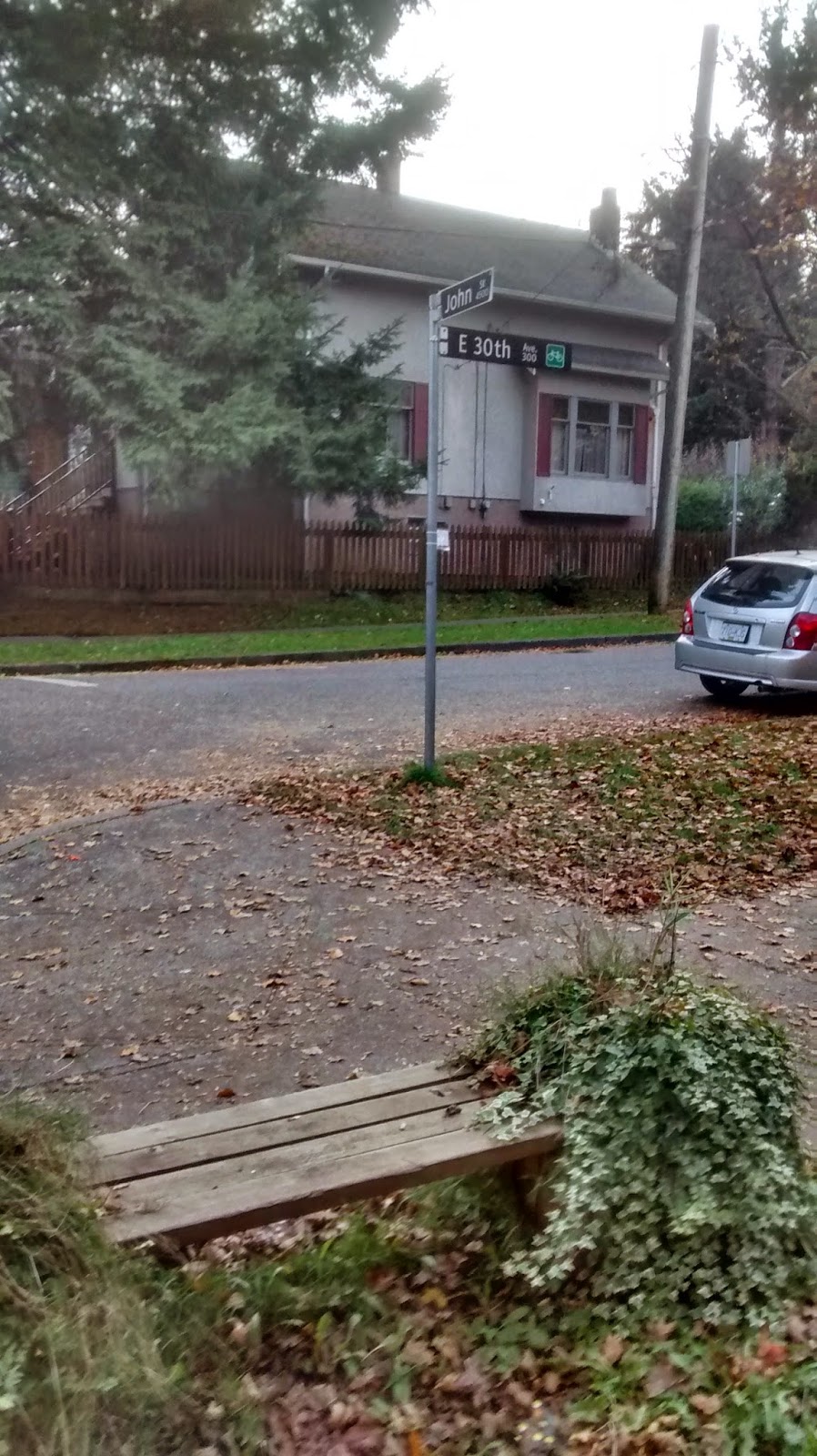 OK, this looks promising... oh, in fact, looking a little closer reveals the next story node actually attached to the street sign's pole! I hope this junction offers an actual choice and not a fake-out like that last segment... a pity it's a little too far away to read while installed on this cozy little bench! 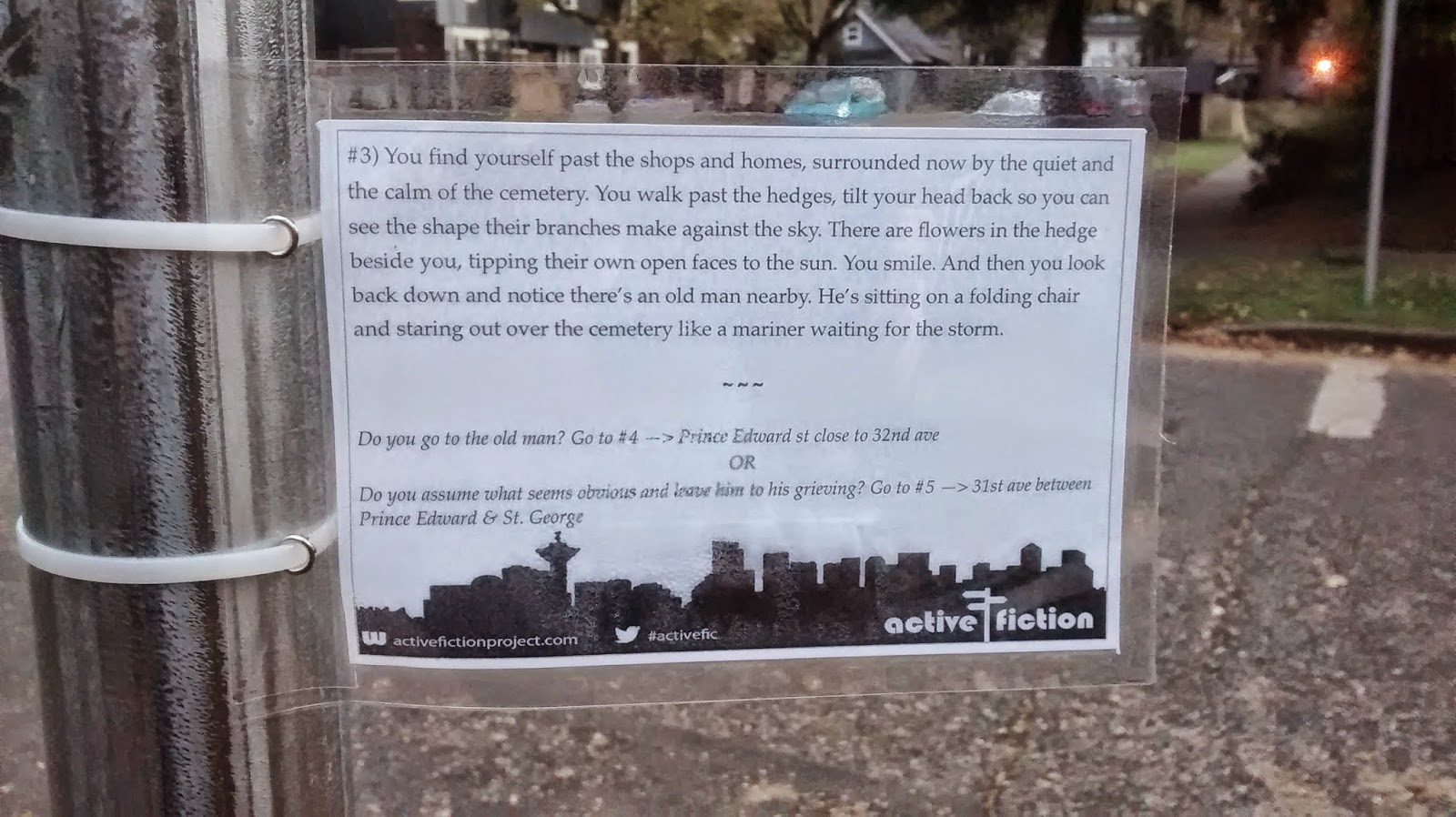 Ahh, "the calm of the cemetery". Either way, it hangs over us. 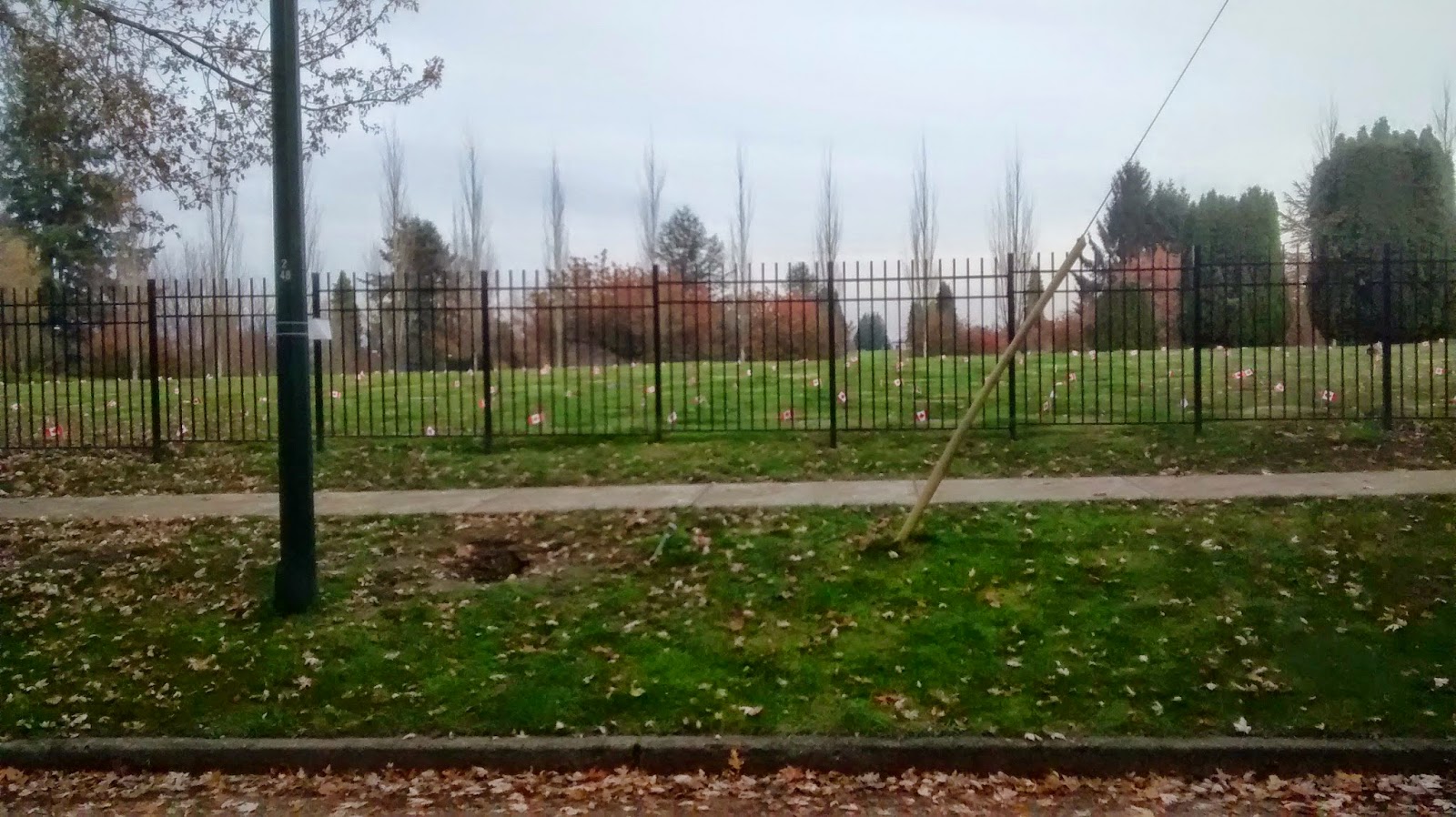 Those really are funereal cypresses in the Mountainview cemetery. This bit of frivolity about exploring near graveyards actually is set up just outside the cemetery grounds. In respect -- not for the deceased, but for the author, now that we've finally arrived at a choice junction, I'm going to lay off on documenting the contents of the story nodes, instead providing a little photo essay summarizing my pursuit of the rest of the story threads. 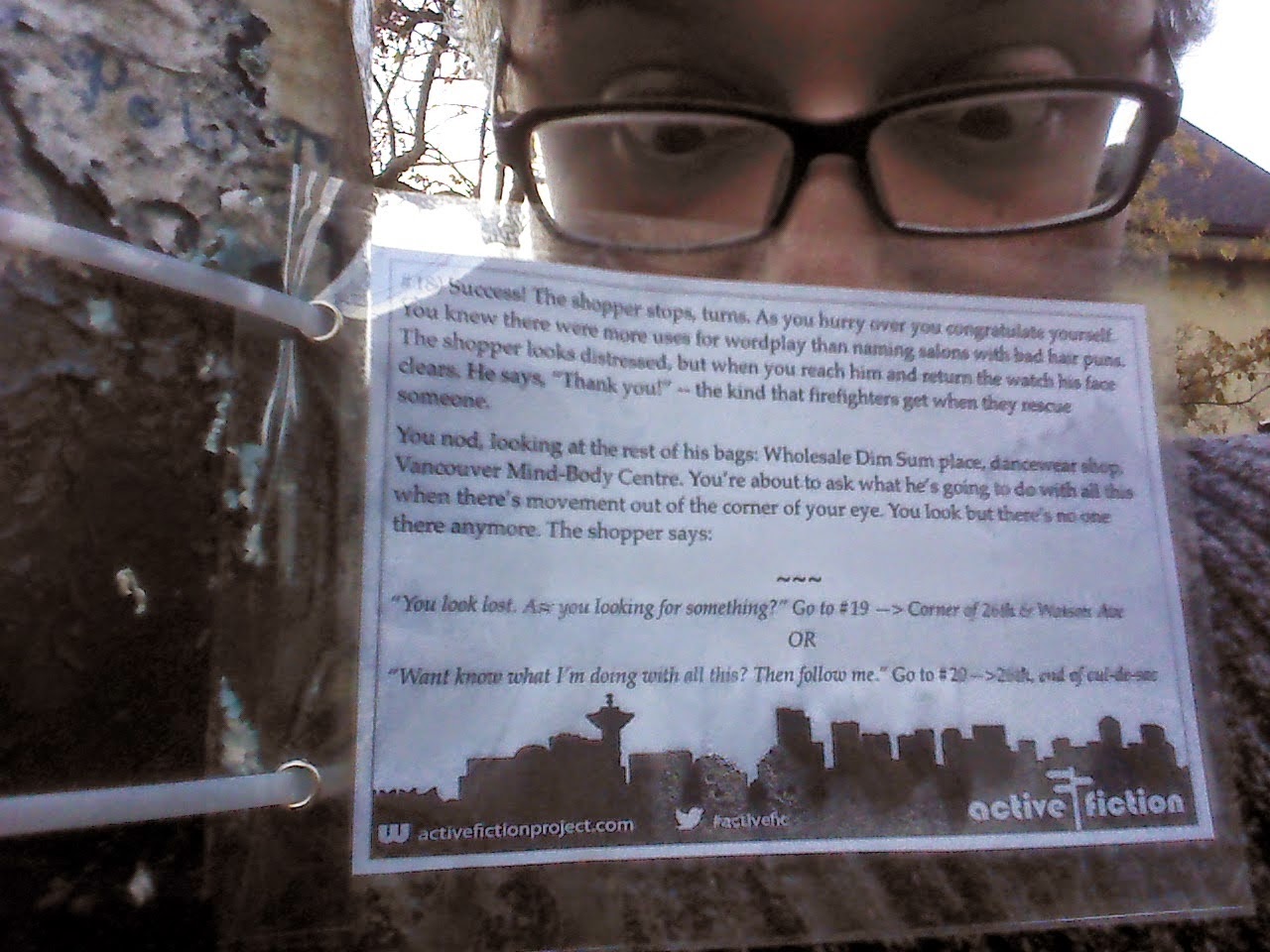 Found it! But it's very hard to read from this position. 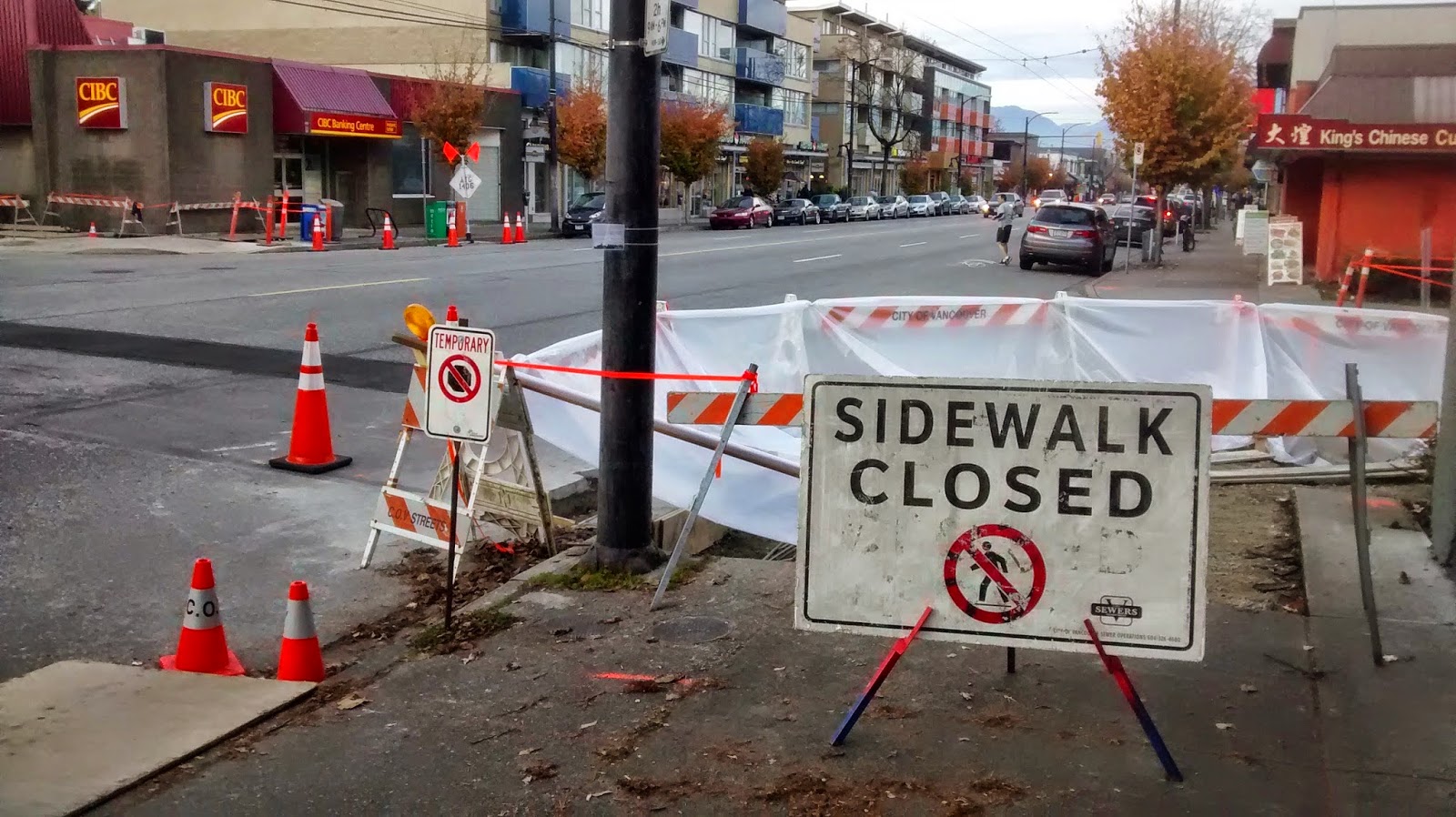 Nobody said that playing this game through to 100% completion would be easy! There are real geographical risks and hazards in effect here! 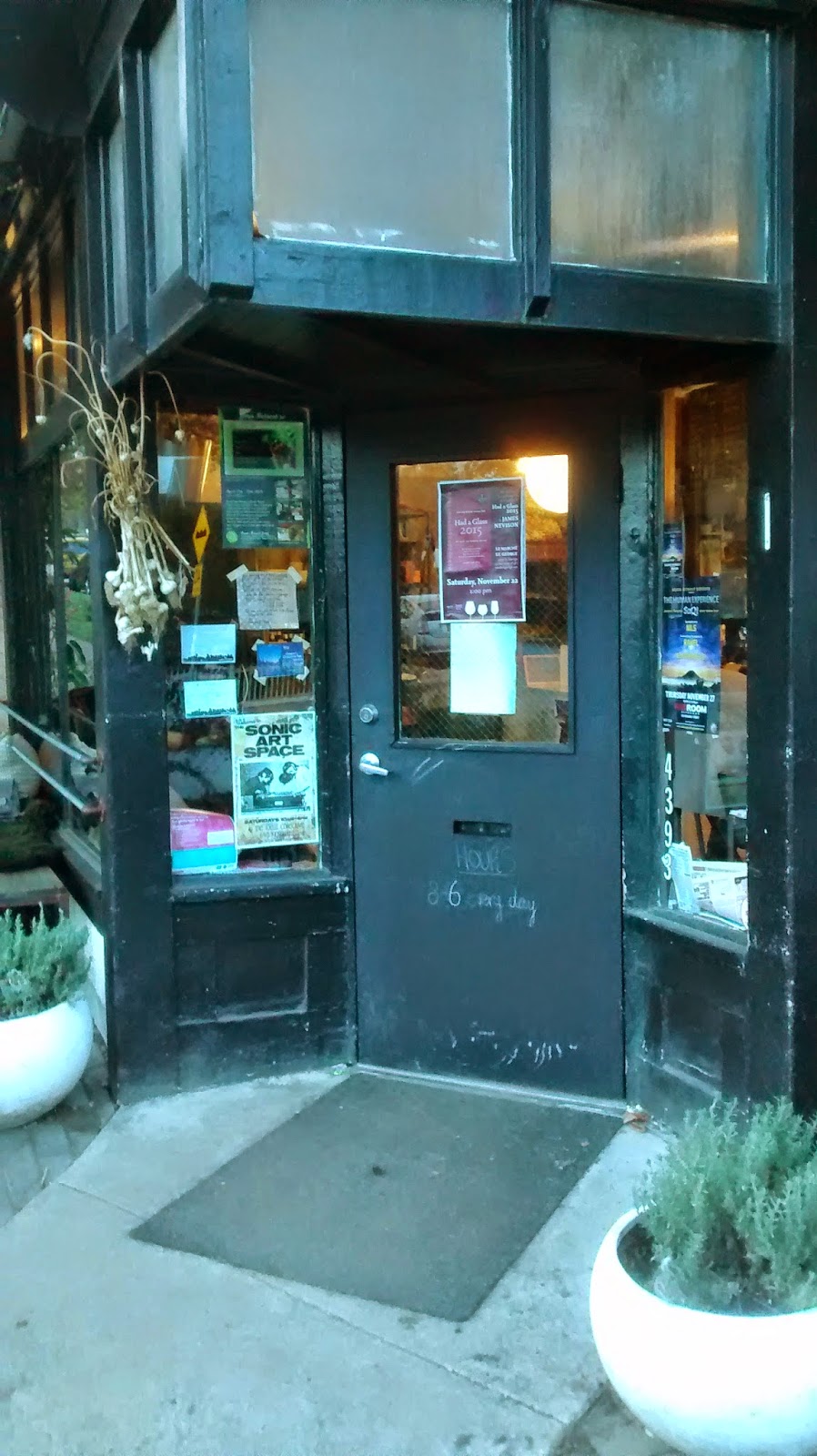 The final story thread leads me to this unassuming neighbourhood business for its conclusion (a "best ending"?) -- but wait, what's that in the window? 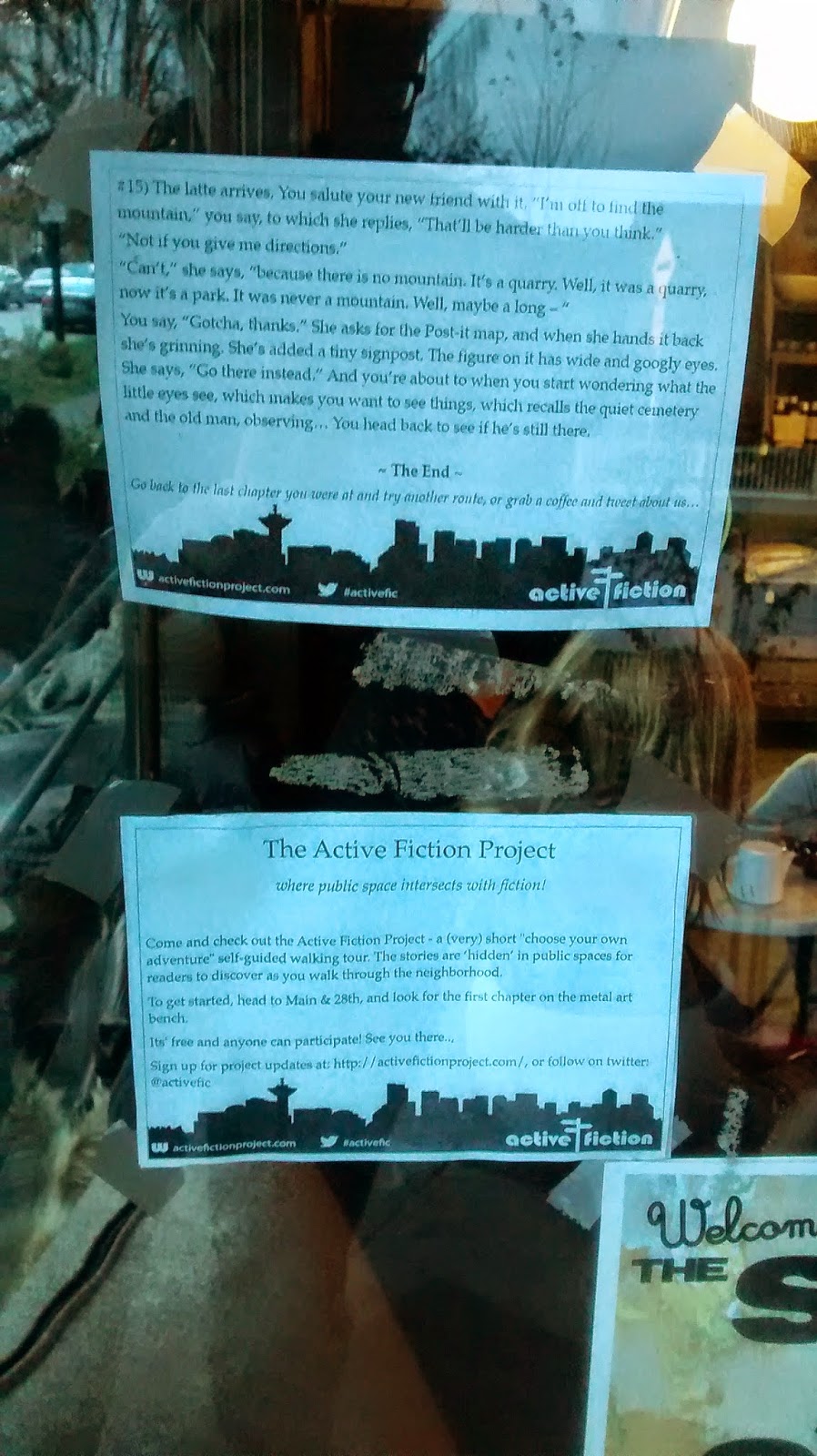 A game well played! Hats off, Active Fiction Project! Now that I've learned it wasn't just a one-off, here's looking forward to the next one! 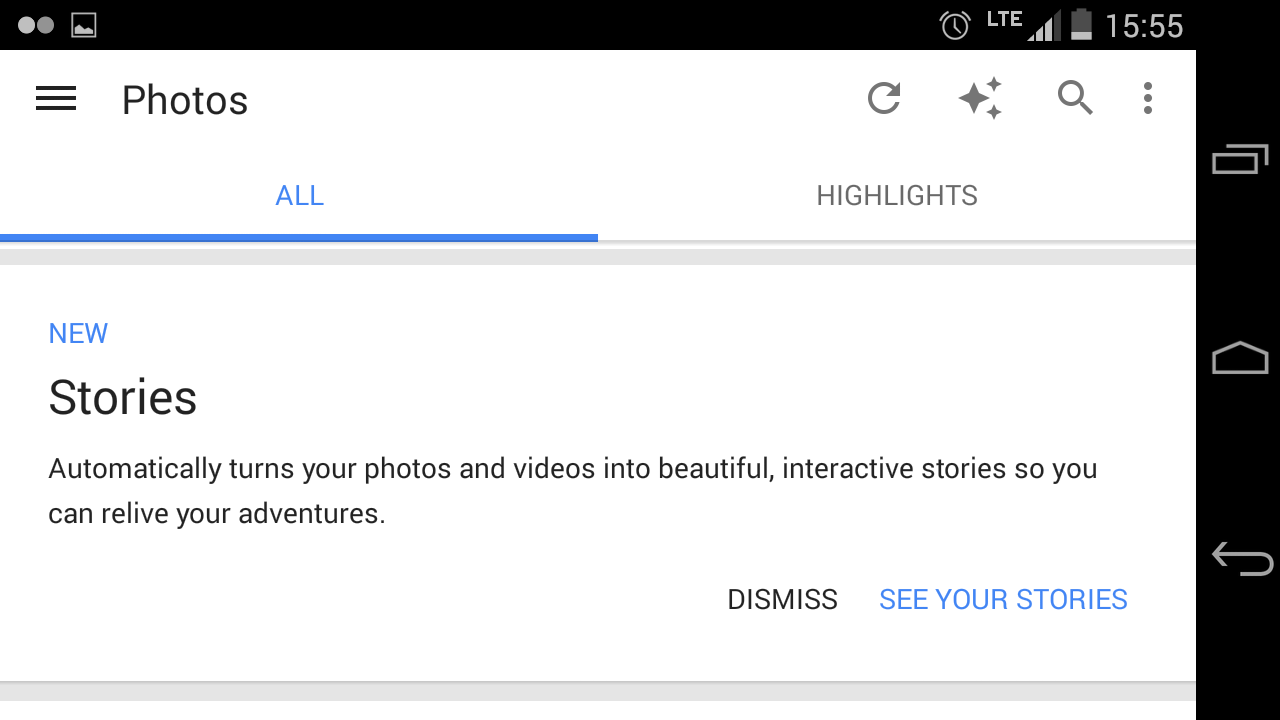 Humorously, this is what my smartphone tells me while auditing my pile of photos from the hunt. Google, I don't need your help to turn these photos into beautiful, interactive stories -- that's already what they're about!