more about the Active Fiction Project

So here we are. At last report, I had ventured out into the darkness the first night I heard about this project to go and check out the story nodes, returning with a handful of blurry cameraphone pics and some story fragments. Knowing that this work was not only constrained in space -- preventing most of you readers from ever experiencing it at all -- but also in time, I knew I had to strike while the iron was hot and deputized an old friend, storygame enthusiast Daniel Wood, to go forth on my behalf and document the heck out of this work. One weekend later, every passage had been photographed (only the first is one of my nighttime shots, the rest by M. Wood) and now, these photos are the only way of experiencing the work now that the public installation of the laminated cards has been rolled back. (On the plus side, consolidating the pictures here is also a streamlined way of experiencing the story without having to tromp all over Hell's half-acre and back through Riley Park, though it might be argued that doing so was kind of the point of such a geo-centric piece.)

It has all now been converted for your enjoyment. I'm waiting to hear back from its author, talented UBC creative writer Nicole Boyce, but have boldly gone forth to share the piece in confidence that putting it out in public was really what it was about all along. (Besides, putting one of these up in my hometown is somewhat of a bold provocation. How was I supposed to not document it?) 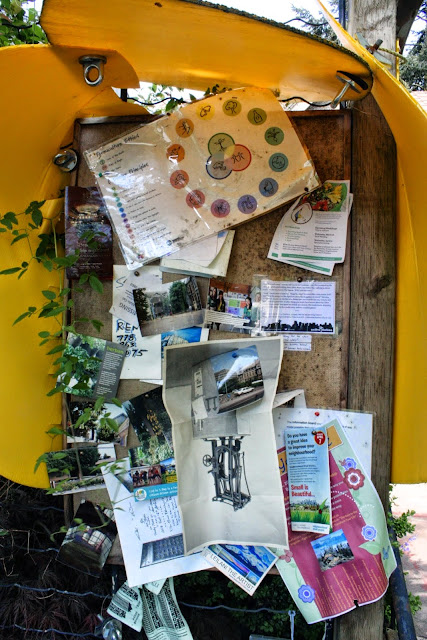 Here you can see a story passage, number 13, hiding on the right centre of a community bulletin board. The story is a brief 20-passage affair with two main forks allowing readers to switch streams -- I believe it may even be possible to juggle them off of each other indefinitely, for a perpetual loop story presumably unintended by the author. A node map analysis may follow, but really it's concise enough to wrap your head around its structure just reading through. I didn't see this during my nighttime photo expedition, but you may note some stickers on the backs of the story placards shining reversed text through -- they are inviting random pedestrians who don't understand what they have just encountered to go to node #1 and start the story from the beginning.

[June 8: It has all been photographically documented for my own personal enjoyment! But, regrettably, in order to preserve the author's ability to later sell rights of first publication to a literary journal, you will not be seeing the full text of the piece here until such time as rights to subsequent republication can be arranged.]